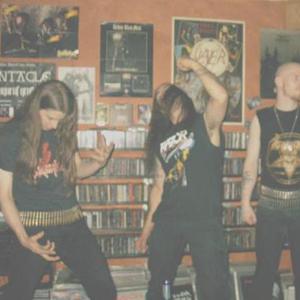 OLD is a German band formed in 2003 by Reaper (vocals), Doomhammer (guitar/drums) and Horus (bass guitar). The band was born to be a dedication to the old school Black Metal sound of the 80s and early 90s, bands like Celtic Frost/Hellhammer, Slaughter, Bathory, Possessed, Darkthrone, Mayhem, Venom, Sodom and Destruction. In 2004 OLD recorded their "Blood Skull" rehearsal tape, originally limited to 50 copies, but in cause of the great feedback from all around the world they raised the amount of tapes.

They kept going as a pure rehearsal band 'til they recorded the "Nocturnal Ritual" 7" in summer 2004. In the beginning of 2005 OLD also signed on Tyrant Syndicate Records a sub label witch is under the wings of Peaceville Records, so they recorded their first full length album "Down With The Nails" in the end of summer 2005.

The Musical Dimension Of Sleastak