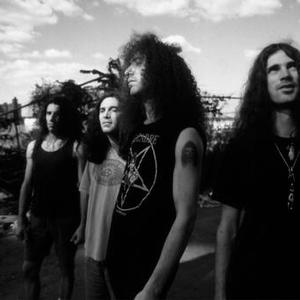 Brutal Truth is a New York City-based grindcore band that was formed in 1990 by ex-Anthrax and Nuclear Assault bassist Dan Lilker. Brutal Truth was one of the pioneers of grindcore who enjoyed world wide success, particularly in Japan and Australia. Originally signed to Earache Records, on which they released two albums, 1992's Extreme Conditions Demand Extreme Responses, and 1994's Need to Control, as well as an EP entitled Perpetual Conversion, and a 7" single for the song "Godplayer".

Originally signed to Earache Records, on which they released two albums, 1992's Extreme Conditions Demand Extreme Responses, and 1994's Need to Control, as well as an EP entitled Perpetual Conversion, and a 7" single for the song "Godplayer". During this time, music videos were made for the songs "Ill Neglect", "Collateral Damage", and "Godplayer". Brutal Truth found frustration with Earache Records, as did many 1990s Relapse Records bands, and switched to Relapse Records, known for its roster of grindcore acts, with whom they stayed until the band's demise.

On Relapse they released the mini album Kill Trend Suicide, a full length release entitled Sounds of the Animal Kingdom, and a double CD live album called Goodbye Cruel World. The band has also released many split 7" singles on smaller labels, with most of these being out of print and difficult to find.

In 2001, the Guinness Book of Records awarded Brutal Truth the record for "Shortest Music Video" for their video "Collateral Damage," which weighs in at 2.18 seconds long and consists of 48 still images in rapid succession followed by a clip of an explosion.

Drummer Rich Hoak now provides vocals and drums for a new project titled Total Fucking Destruction. Kevin Sharp released an album with Venomous Concept in 2004, a hardcore punk band featuring members from The Melvins and Napalm Death whose music (and band name), are a tribute to Poison Idea. He was also a member of Australian grind band Damaged for a little over a year from 1999. Dan Lilker now plays for a host of bands and is currently bassist for the re-united Nuclear Assault.

As of late 2006, according to their official website and MySpace page, Brutal Truth has reformed with three-quarters of the final lineup returning (Lilker, Hoak and Sharp); Jody Roberts (of the band Salt This Earth) is apparently replacing Brent McCarty on guitar. The band has played a handful of dates in the US and has announced tour dates for the UK and Japan beginning in early 2007.

Sounds Of The Animal Kingdom