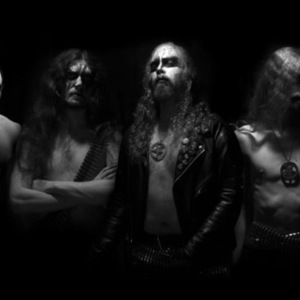 ENTHRONED was formed in 1993 by Cernunnos in Namur, Belgium. He soon recruited guitarist Tsebaoth and later bassist/vocalist Sabathan. The band released a 5-track demo tape in mid 1994 which brought them to the attention of several independent labels. A 7? split EP with Ancient Rites was then released by the underground label Afterdark Records. After the label's demise, Evil Omen Records (a sub-label of Osmose Productions) released ENTHRONED's first full-length release, Prophecies of Pagan Fire.

Shortly thereafter, the band enlisted second guitarist Nornagest. Eventually, Tseboath was replaced by Nebiros, a very extreme musician who not only brought new blood into the band, but also complemented Nornagest's brutal and barbaric style. Since the release of their first demo, ENTHRONED has always nurtured their amazing live reputation. They have shared the stage with the likes of Marduk, Enslaved, Dark Funeral, Angelcorpse, and Emperor, to name but a few. In 1996, along with Ancient Rites and Bewitched, ENTHRONED began an extensive tour of Europe.

In April 1997, as ENTHRONED was to begin recording Towards the Skullthrone of Satan, Cernunnos took his life. Albeit a heavy blow for the remaining members, ENTHRONED forged ahead, recording the album with a session drummer in honor of Cernunnos. The blackened horde went on to perform at the Dragons Blaze festival with newly acquired drummer Namroth Blackthorn. The crowd's response could not have been better. In April 1998, the band toured the European continent with Dark Funeral and also released the MCD Regie Sathanas, an internationally acclaimed Black Metal masterpiece dedicated to their deceased comrade. Later that year, they toured again with labelmates Hecate Enthroned and Usurper.

At the close of 1998, the band entered Abyss Studios (Sweden) to give birth to The Apocalypse Manifesto. This third album was released in May 1999. No other title could better reflect the intensity of this satanic work, which dealt with the biblical concept of the Apocalypse as interpreted by a satanic perspective. ENTHRONED rounded off the 20th Century on tour with Marduk and continued to take European crowds by storm with several other live performances.

2000 was a busy year for ENTHRONED. The band parted ways with Nebiros and recruited Nerath Daemon as their new axeman, who then successfully passed his trial by fire on a German mini tour followed by several other European shows and the recording of Armoured Bestial Hell in the Real Sound Studio (Germany). This fourth album was released in April 2001. Unfortunately, the band was to endure another line-up change. Namroth Blackthorn was released from his duties and was replaced by Alsvid from the French Black Metal band Seth. ENTHRONED continued to play many live gigs in and around Europe, as well as in the US.

In early 2002, ENTHRONED signed to NAPALM RECORDS releasing their fifth full-length recording, Carnage in Worlds Beyond, later that year. In June 2003, ENTHRONED added Nguaroth (guitars) and Glaurung (drums) to their line-up and readied for a South American tour, as well as the release of their sixth and anxiously awaited album, XES Haereticum.

In 2005, Enthroned released their first official live album, Black Goat Ritual, recorded during their successful tour of Brazil. Yet after desecrating several stages and festivals, the band was once again forced to tackle a line-up change. ENTHRONED parted ways with longtime vocalist Sabathan, at which time Nornagest took over the vocal responsibilities, bass player Phorgath joined the band on bass.

In June 2007, ENTHRONED recorded their seventh and most accomplished album Tetra Karcist, seeing the return of old drummer Alsvid for the studio sessions. The album being recorded, Enthroned made a pact with Ahepha?m who joined the band on drums until the end of 2009.

At dawn of 2010, Enthroned is actually working with a new line-up on their future release on the swedish label REGAIN Records.

Carnage In Worlds Beyond

Regie Sathanas: A Tribute To Cernunnos