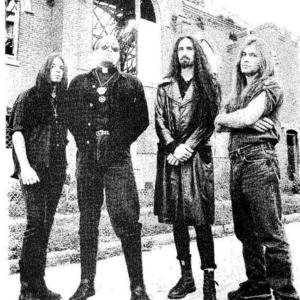 After over 20 years of making diabolical music, the legendary Cult Black/Death Metal band ACHERON has decided to call it quits. As trends came and went, this pack of godless heathens stayed true to the very roots of their underground origin.

In 1988, Vincent Crowley unleashed sinister fury upon the world with the creation of ACHERON. The band was invoked to embody the very essence of darkness, crystallized in the violent sounds of apocalyptic rage. Two forces creating a unique musical amalgam.

In 1991, the band signed to TURBO MUSIC/JL AMERICA and recorded their first full-length album, RITES OF THE BLACK MASS. This became an underground classic. A decade later, this classic album was re-released in a limited edition (without permission) pressing on Germany's METAL AGE RECORDINGS.


In 1992, GUTTED RECORDS (soon to become METAL MERCHANT RECORDS) released ALLA XUL. This was a 7-Inch Record in which the first 500 copies were pressed in Blood Red Vinyl with 2 different playing speeds on each side of the record. The next 500 were pressed in a different color of red. Only 1000 copies of this record were pressed.

When LETHAL RECORDS released finally released SATANIC VICTORY, it was not what the band envisioned, so ACHERON put together a reworked version and released it on METAL MERCHANT RECORDS. The new version included two extra songs (featured on ALLA XUL). The album went by the originally planned title HAIL VICTORY. This version was a limited 1000 copies pressed for the true ACHERON hordes.

An unauthorized ACHERON video, created by Nickolus Omn called LUST, SIN CHAOS AND BLASPHEMY surfaced in 1995. It was a semi-pro video samples video that used 14 ACHERON songs and a previously conducted interview with Vincent Crowley. It was a production of multiple frenetic imagery combined with the background of ACHERON music. LUST, SIN CHAOS AND BLASPHEMY 2 would later surface.

ACHERON was then featured on several compilation albums, including TURBO MUSIC/JL AMERICA's TRIUMPH OF DEATH and BRUTAL AGGRESSION, and NUCLEAR BLAST's European version of DEATH IS ONLY THE BEGINNING 3. These compilations helped introduce ACHERON to many new fans.

In 1996, MORIBUND RECORDS signed the band. It was here that ACHERON released the mini-CD entitled ANTI-GOD, ANTI-CHRIST. The mini-CD received excellent reviews in magazines and fanzines worldwide.

A Brazilian version of ANTI-GOD, ANTI-CHRIST was released on DEMISE RECORDS, featuring 2 bonus tracks. The extra songs were a new version of ?Ave Satanas? and a Live version of "Blessed by Damnation" recorded on Halloween in Tampa, Florida. Later, MERCILESS RECORDS from Germany released the mini-CD on 12-Inch Vinyl, with the added bonus tracks.

Interest came in the form of England's BLACKENED RECORDS releasing a 2-in-1 CD of LEX TALIONIS and SATANIC VICTORY. This release received much approval, ACHERON now being promoted as ?the band before their time?. The band frowned upon this release; primarily due to the fact that LETHAL RECORDS sold the album without the band's permission. This act of betrayal did however introduce ACHERON to a wider spectrum of fans.

In 1998, ACHERON recorded their next full-length album THOSE WHO HAVE RISEN. This concept album, based on Ancient Vampire teachings, was originally supposed to be released by MORIBUND RECORDS. However, some difficulties did arise and the album ended up being released on FULL MOON PRODUCTIONS.


ACHERON was also featured on LOST DISCIPLE RECORDS' VISIONARIES OF THE MACABRE VOL. #1 compilation CD, ALABASTER RECORDS' compilation CD SO MOTE IT BE and FULL MOON PRODUCTIONS' TRIBUTE TO HELL compilation CD. The band was generating a lot of hype within the scene and was also featured on several DWELL RECORDS releases, including tributes to IRON MAIDEN (A Call to Irons 2), MOTORHEAD (Dead Forever), KISS (Kiss of Death), JUDAS PRIEST (Hell Bent for Metal 2), BLACK SABBATH (Hell Rules 2) and VENOM (In the Sign of the Horns). STILL DEAD PRODUCTIONS also featured ACHERON on their MERCYFUL FATE tribute entitled ?The Unholy Sounds of the Demon Bell?. FULL MOON PRODUCTIONS has also release a Tribute to KREATOR featuring the band as well.

FULL MOON PRODUCTONS released an ACHERON collector's album, featuring all of the band's demo recordings and some other unreleased material. The album was entitled COMPENDIUM DIABLERIE: The Demo Days and contained 21 tracks of demo material from 1989-1995. This album is a must have for all die hard ACHERON fans.

After a short hiatus, ACHERON regrouped. The band recorded a 2 song demo recording of songs that would be featured on their next full length album. At this time WARLORD RECORDS from Italy contacted ACHERON about doing a release on their label. The band agreed. Two keyboard introductions and the two demo versions of ?The Kindred? and ?Xomaly? were used, so that they could release it as a 12-Inch mini-LP and a limited hand stamped 1000 copies mini-CD. XOMALY was released in late 2002.

ACHERON has been featured in hundreds of magazines and fanzines from all over the globe and have also been featured in the books: LUCIFER RISING: Sin, Devil Worship and Rock ?n' Roll by Gavin Baddeley, A-Z DEATH METAL and A-Z BLACK METAL (both books by Garry Sharpe-Young) and Stephano Marzorati's DIZIONARIO DELL: Horror Rock. And ACHERON has also appeared on the soundtrack to the cult-B-Grade motion picture CREMAINS. Showing ACHERON is still very active within the music scene.

Crowley got in touch with BLACK LOTUS RECORDS. The label seemed very interested in signing ACHERON. At that point a deal was arranged to release a collection of cover songs that ACHERON has recorded throughout the last decade. The name of the release was called TRIBUTE TO THE DEVIL'S MUSIC. This album was to be a homage to the metal bands that members of the band identified with in their youths. The album features 12 tracks. Even the album's cover art is reminiscent of the Classic Metal years.

Halloween 2003 marked the release of their album REBIRTH: Metamorphosing into Godhood. It was the first original full length album ACHERON released since 1998's THOSE WHO HAVE RISEN. This album rejuvenated the band's life-force. It was released on BLACK LOTUS RECORDS. The album unleashed a tremendous and welcomed response from the fans. REBIRTH: Metamorphosing into Godhood has also been licensed in some other places.

Thus marks the year 2004. BLACK LOTUS RECORDS has released a band history double-CD called DECADE INFERNUS 1988-1998, which contains 32 songs from the bands 10 year span of RITES OF THE BLACK MASS straight onto THOSE WHO HAVE RISEN. All the songs are digitally re-mastered and an informative booklet and slipcase are included. This limited 3000 numbered (stamped) release is for ACHERON fans both old and new.

ACHERON has already written new material for their next album, tentatively called SANCTUM REGNUM: The Predator Manifesto. If all goes as planned, the band will be recording it sometime in 2005. So beware, this musical war machine is far from being done! In Blood?????

SANCTUM REGNUM became THE FINAL CONFLICT - THE LAST DAYS OF GOD and was released in 2009. In April 2010, it was announced that Acheron had broken up.

Tribute To The Devil's Music