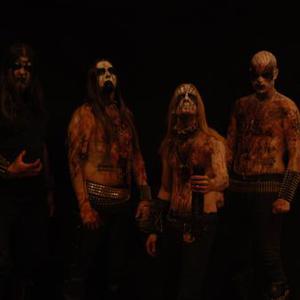 There are many bands with the name of Ragnarok.: 1) A Black Metal band from Norway (Sarpsborg) 1994: Ragnarok was formed by Jontho and Jerv after they left their previous band called Thoth. Thyme and Rym soon joined the band which gave the following lineup: Jontho ? drums, Jerv - bass, Rym - guitar and Thyme - vocals. At the end of the year Ragnarok recorded a demo called 'Pagan Land'. The demo was recorded in a small studio called Haga Audio located in Sarpsborg. As the studio had no experience with black metal, the sound came out to be very bad and the response was not so good.

1994: Ragnarok was formed by Jontho and Jerv after they left their previous band called Thoth. Thyme and Rym soon joined the band which gave the following lineup: Jontho ? drums, Jerv - bass, Rym - guitar and Thyme - vocals.
At the end of the year Ragnarok recorded a demo called 'Pagan Land'.
The demo was recorded in a small studio called Haga Audio located in Sarpsborg. As the studio had no experience with black metal, the sound came out to be very bad and the response was not so good.

1995: Ragnarok took part on a compilation CD for local bands in Sarpsborg and recorded a song called 'Et Vinterland I Nord'. This recording was pretty ok so Ragnarok decided to send out that song to some media and people around the world to get some feedback. The feedback was very good which made Ragnarok decide to re-record the demo in another studio in Sarpsborg called X-Ray Studios. Shortly after the release of the demo Ragnarok received very good reviews and feedback from different media in the scene and also signed with the cult label Head Not Found Records.
Ragnarok went to X-Ray Studios again in the summer to record their debut album called 'Nattferd'. Nattferd was released the same year and the first gig took place at the MC-club Lacoste MC in Sarpsborg.

1996: Ragnarok was not satisfied with HNF Records' work on the Nattferd album so they decided to leave them and seek another label for future releases. When Ragnarok started searching HNF came up with a much better deal and Ragnarok re-signed with HNF for two more albums.
The same year Ragnarok played a gig in Oslo at the famous bar Elm Street together with Old Man's Child, and shortly after the gig Ragnarok got news from Century Media who were interested in signing the band. Since Ragnarok was bound to a contract they had to say no to Century Media.

1997: Ragnarok entered the studio X-Ray in Sarpsborg once more to record the second opus called 'Arising Realm' and released it the same year.
Ragnarok also got help from Shagrath of Dimmu Borgir to play the keyboard on this album. But since he had much work with his own band Ragnarok agreed that he would be a session member for the recordings of the album.

1998: Ragnarok went on their first tour together with Siebenb?rgen from Sweden and Atanatos from Germany. This was just a small tour of eight gigs with one in Copenhagen (Denmark) and seven in Germany. When Ragnarok were on tour they got an offer from 'The Hellraiser Festival' in Leipzig to perform. And so in the summer of 1998 they performed with bands like Lord Belial, Gehenna, Enslaved, Aerturnus and many more?
At the end of the year Ragnarok was ready to record their third album called 'Diabolical Age' and this time the recording studio would be ?Endless Studio' in Oslo.
Since the recording started around Christmas and the engineer was going to have a longer vacation, Ragnarok had to continue the work the next year.

1999: The recording of Diabolical Age continued but the mix became awful. The album needed re-mixing five more times, also another engineer was needed to get a better result. After the recording Thyme decided to leave the band because of other interests in his life and he didn't want to be in the band when he couldn't give a full 100%. Because of his departure the release of Diabolical Age was delayed and the search for a new vocalist started.
Rym did also have some new material ready, and meant that it would be the best for the band to get one more guitar player in the band to develop 100% musically.
Sander from the band Shadow Dancers became a member of Ragnarok.

2000: A man called Astaroth from the northerly part of Norway became the new singer of Ragnarok. A little while later the Diabolical Age album was released. Ragnarok took part at the 'Under The Black Sun Festival' in Germany and the band was shocked by the poor performance of Sander. His performance was that bad that he was kicked out of the band as soon as they got home from the festival. Astaroth did well on stage and Ragnarok decided to let him stay in the band. Ragnarok was left again without a second guitarist and a friend of the band called Lord Arcamous was soon asked to join for a tour later the same year. This tour was together with the Swedish band Satanic Slaughter. This was a self financed tour and very hard on the band since Rym had to stay home for personal reasons. The pressure on the tour showed that Astaroth wasn't the right man for the band and he was kicked after the tour.
The contract with HNF was finished after the release of Diabolical Age and the search for a new label began.

2001: Lord Arcamous became a fulltime member of the band and since Astaroth was kicked he also took over the job as vocalist.
Ragnarok started to spread their music to different labels and got hooked up with the fast growing label Regain Records from Sweden. It was a honor that Regain Rec. was interested in the band and the signing for two albums took place.
Ragnarok entered the Abyss Studio in the summer to record the album 'In Nomine Satanas', engineered by Tommy T?gtgren.

2002: The release of In Nomine Satanas took place and Ragnarok went on tour with Dark Funeral, Anorexia Nevosa, Occult and Tidfall.
This tour became one of the worst tours that had ever been arranged. There were a lot of problems from day one. Again Ragnarok was cursed by bad luck and Lord Arcamous decided to leave the band after the tour. The reason was some personal stuff and that he simply couldn't take the pressure to continue. After this tour the moral in the band was pretty low and not much happened in the camp for several months.
Jontho then took part in a Norwegian band called Tsjuder to play drums on their latest album called 'Demonic Possession'. A live performance in Germany at the 'Under The Black Sun Festival' with Tsjuder gave Jontho the opportunity to see Taake live. The performance of the vocalist in Taake was that great that Jontho asked him if he would be interested in a tryout with Ragnarok. Shortly after the festival Hoest wanted to give it a go and see if it was something for him and the band. In September Hoest came to Sarpsborg to do the vocals on a Celtic Frost cover and it turned out that he was perfect for Ragnarok.
New material was under construction and later the same year with great help from the label and a close co-operation with Metallysee, Ragnarok was ready again to go on tour.
Ragnarok toured the X-mass Festivals in Europe together with Six Feet Under, Exodus, Marduk, Macabre, Impaled Nazarene, Immolation, Hate Eternal and Anteus.

2003: Ragnarok entered the Abyss Studio in March to record the next album Blackdoor Miracle and again the engineer was Tommy T?gtgren.
Ragnarok performed at the Inferno Festival in Norway which was a success.

2004: The release of Blackdoor Miracle took place on the 26th of March after a lot of delays.
Ragnarok did a lot of live shows in 2004 and are proud to say that every single one of them was a huge success. The band really showed that they have grown as a live band and also got the chance to spread their hate to people in places where they never played before.
A Mexican tour of three gigs in September, a European tour together with Krisiun, Behemoth and Incanatation consisting of 26 gigs between October and November 2004 and a single show in Russia in December. Ragnarok also did some single shows here and there throughout the year and will continue to do so in 2005.

2005: New songs are under construction and as always Ragnarok is looking for gigs and tours around the world...

Ragnarok were formed in Auckland in 1974, out of the remnants of breweries band Sweet Feet. Andre, Ross and Mark were originally from Christchurch, where they were together in a three piece called Flying Wild at the beginning of the seventies. They then formed Sweet Feet and moved to Auckland, where they played the pub circuit. In 1974 they disbanded this group, and it was at that point they met up with Ramon York and Lea Maalfrid.

Applying glitter, dressing loud and developing a song list of Pink Floyd, Led Zeppelin and Yes, they formed Ragnarok. They quickly established themselves as being the ultimate acid band of the mid-seventies. They were right into synthesizers, where their instruments featured guitar synthesizers, keyboard synthesizers and mellotron. They all shared the vocals, but were also very fortunate to have one of the finest female vocalists around at the time, Lea Maalfrid, as a member of the group.

During 1974 they had a residency at Granny's and also appeared regularly at the 'Buck-a-Head' concerts, that saw them as popular as Split Enz and Dragon. In January 1975, Tommy Adderley closed Granny's for renovations, and when he re-opened it two months later as Granny's Rock Palace, he decided not to run with resident bands. This left the group without a regular place to play, so they decided to take to the road and toured the country extensively. They became one of the countries top draw-cards during 1975, particularly in the South Island and the provinces.

In August 1975, they released a self-titled album on Revolution, that they had recorded at Eldred Stebbing's new 16-track studio. It sold reasonably well and from it came two singles, "Fenris"/"Fire In The Sky" and "Cavier Queen"/"Born To Wander". "Fenris" provided them with a minor hit that made the bottom reaches of the charts.

At the end of 1975, Lea Maalfrid left the group to turn solo. She released one single on Atlantic in 1977 called "Pleasure Machine"/"Lavender Mountain", before leaving for Sydney in June 1978, and then later moving to Los Angeles and London, where she gained international recognition as a songwriter. Ragnarok continued on without Lea, and in 1976 they released a second album called "Nooks" and a single from the album, "Five New Years"/"The Fourteenth Knock".

In December 1976, Ragnarok appeared at a one-day festival at Waikino. Other headlining acts included the Country Flyers, Rockinghorse, Hello Sailor and Th' Dudes. By this time though, Ragnarok's cosmic rock was definitely out of favour, and their support was now wholly confined to the provinces. They had even tried a self-promoted national tour of theatres to promote their second album, but this was a failure, and the group disappeared to the east-coast of New Zealand before disbanding.

Mark Jayet later went on to join Moviez, a Christchurch based pop group.

Collectors Of The King