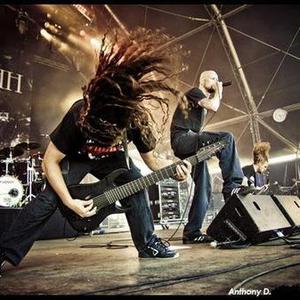 Meshuggah, whose name is taken from the Hebrew and Yiddish word for ?crazy?, is a five-piece band from Ume?, Sweden, founded in 1987. The band's style is most easily described as extreme/technical metal with some jazz influence. They use extended polymetric passages, complex drum patterns, angular, dissonant guitar riffs, and harsh vocals. Their lineup has always been consistent, apart from bass which has been handled by many people since the band's inception.

Meshuggah is widely acknowledged as an influence on many modern metal bands from Textures to Tool. They are regarded as pioneers by critics and musicians alike.

Meshuggah was formed in Ume? in 1987; two years later, the band released their first record, an EP entitled Psykisk Testbild (which can be roughly translated as "Psychological test image". This recording displayed a straightforward thrash metal influenced sound, with some strains along the lines of Metallica's concurrent releases. There were also hints of more complex music in the songwriting. As the group grew older, they further refined the technicality of their musicianship and songwriting. This led to a harsher sound, utilizing strong seven string guitar (and later eight string guitar) rhythms, manic sounding vocals, and a combination of jazz fusion elements as well. This caused the band's style to border on the lines of an esoteric feel. This style has shown to be hard to appreciate by some but it is widely embraced by Meshuggah fans.

While the band's music is extremely intense and aggressive, the members often demonstrate a strong sense of humour: their video for "New Millennium Cyanide Christ" consisted of the five band members sitting inside their tour bus headbanging and air guitaring to the song. Promotional photos of the band often include comical grimacing.

In late 2005, Meshuggah were nominated for a Swedish Grammy for the album Catch Thirty-Three.

Bands such as Dream Theater, God Forbid, Deftones, Textures , Lamb of God, The Safety Fire and Tool have cited Meshuggah as an influence.

Among the band's most recognizable qualities are lead guitar player Fredrik Thordendal's abrasive, chaotic and dischordant solos, singer Jens Kidman's vocals, which resemble manic screams and shouts; the churning, dissonant rhythm guitars and the polymetric drum beats. In a typical Meshuggah song, drummer Tomas Haake plays two separate rhythms: a standard 4/4 beat with his hands, and a completely different metrical subdivision with his feet. The guitars mostly follow the bass drum work, creating an awkwardly pulsating rhythmic pattern to work as the basis of the song.

To give an example, the main riff of the song "New Millennium Cyanide Christ" from their 1998 album Chaosphere follows the aforementioned blueprint. Haake beats a rather slow 4/4 rhythm with his hands, while the bass drums and guitars play a repetitive 23/16 rhythm pattern on top of it. As the subdivided pattern is repeated, the pattern's accents shift to different beats on each repetition. After repeating the 23/16 pattern five times, a shorter 13/16 pattern is played once. These patterns sum up to 128 16th notes, which equals exactly 8 measures in 4/4 meter.

The band has evolved through a number of stylisitic periods. Contradictions Collapse and None have a sound similar to Metallica's concurrent albums. Destroy Erase Improve and Chaosphere have a more distinct off-time influence along with the thrash metal sound. Nothing and Catch Thirty-Three have a sound close to the vein of groove metal, consisting of droning and slow grooves.

While live drums were obviously not abandoned, a unique decision was made to use programmed drum patterns using Toontrack's "Drumkit From Hell" (developed in co-operation with Tomas Haake and Morgan ?gren) sample library on the latest album Catch Thirty-Three, not only providing a more precise and mechanized drumscape, but also making drum beat creativity a more collaborative effort amongst all of the band members. It cemented the album as one of the band's most complex works to date. The band members have, however, stated in several interviews that the decision to use programmed drums was due to the lack of time given by their label to produce the record.

On all records since Nothing, guitarists Thordendal and Hagstr?m use custom-made Nevborn, and custom Ibanez eight string guitars. These guitars add two low strings to allow the crushing, heavy riffs to be played in even lower registers. They currently use Line 6's Vetta II Amps.

In regards to lyrics, the main lyricist of Meshuggah is drummer Tomas Haake, who uses vocabulary and metaphorical styling. Through abstract descriptions, Haake tackles such topics as: The self, society, mendaciousness, the human condition, and spatial/4th dimensional concepts. While Haake tends to write the majority of the lyrics, guitarist M?rten Hagstr?m also contributes to certain songs.

The Violent Sleep of Reason