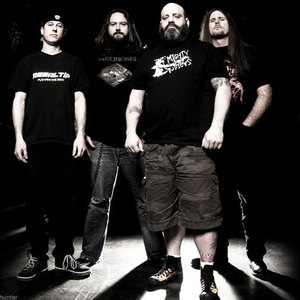 1) Crowbar is an American sludge metal band from New Orleans, Louisiana, United States, characterized by their extremely slow, low-keyed, hardcore and brooding songs. Starting in 1989 and taking its name from the Crowbar group in NOLA (New Orleans), Kirk Windstein went on to pioneer slow and heavy music with a unique vocal style. Their first album, Obedience Thru Suffering was released in 1991, but failed to achieve notoriety.

Starting in 1989 and taking its name from the Crowbar group in NOLA (New Orleans), Kirk Windstein went on to pioneer slow and heavy music with a unique vocal style. Their first album, Obedience Thru Suffering was released in 1991, but failed to achieve notoriety. By 1993's self-titled Crowbar album, personal friend Phil Anselmo (Pantera, Down, and Superjoint Ritual among others) produced the record, which eventually led to national promotion on MTV's Headbanger's Ball. Phil sang back up on a few tracks and sang background on "Broken Glass" which rounded out the anthems "All I Had (I Gave)," "I Have Failed" and "Existence is Punishment" along with a new take on the Led Zeppelin song "No Quarter." Following their success the band went on to record music videos, major tours with Pantera, and more albums. Their band stage antics became infamous, which led to being immortalized in the Pantera "Home Video 3" and Crowbar's "Like Broken" Home Video.

As time moved on the band lost its founding members with the exception of vocalist/guitarist Kirk Windstein. After Todd Strange left the band, the trademark 300-pound-plus band members slimmed down. The band continues to perform, borrowing members from NOLA metal bands like Goatwhore and Acid Bath. In their recent 2005 release, Lifesblood for the Downtrodden, Pantera bassist rex brown lent his bass duties and keyboard playing and Down's producer Warren Riker.

2) Crowbar was a Canadian rock band based in Hamilton, Ontario, probably best known for their 1971 hit "Oh, What a Feeling".

From 1969 to 1970, most of the members of the group had been a backup band for Ronnie Hawkins under the name "And Many Others". However, in early 1970, he fired them, saying "You guys are so crazy that you could fuck up a crowbar in three seconds!" They recorded their first album in 1970 (Official Music) as King Biscuit Boy and Crowbar. King Biscuit Boy left the band later in 1970, but continued to appear off-and-on as a guest performer.[1]
Crowbar's rock, blues and boogie mix made it one of Canada's most popular touring bands of the early 1970s. The band toured in the United Kingdom but, otherwise, made little impact outside of Canada.
Crowbar disbanded in 1975, but was revived in 1977; (minus Jozef Chirowski, who had joined Alice Cooper's band) for a tour of eastern Canada with Kelly Jay and others intermittently during the 1980s with club work in southern Ontario

3) Crowbar was an English Oi band who released the single "Hippie Punks" (backed with a cover of "White Riot") on the Skin Head Records label in the early 1980s. No details of their membership are known.

The Serpent Only Lies

Life's Blood For The Downtrodden

Sonic Excess in Its Purest Form