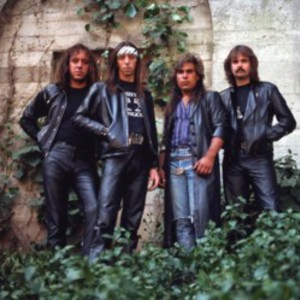 Cirith Ungol was a Californian heavy metal band who formed in 1972 and split up in May 1992. They drew influences from other metal groups such as Black Sabbath and Thin Lizzy, as well as Iggy And The Stooges. Their first album, "Frost and Fire", was closer to a hybrid between 1970s hard rock and metal with songs written by then bassist/guitarist Greg Lindstrom and drummer Robert Garven, but from "King of the Dead" (1984) and onwards they played a progressive rock influenced brand of doom metal with songs primarily written by vocalist Tim Baker.

The band began with Greg Lindstrom, Robert Garven, Jerry Fogle and Pat Galligan (who would later go on to play guitar for Angry Samoans}, were playing in their first band "Titanic" in high school. With a desire to play heavier music, the rest of the band dumped Pat and reformed in 1972 as Cirith Ungol with Neal Beattie on vocals. It wasn't until 1980 that they were signed by Enigma and released their first record "Frost and Fire" with Tim Baker on vocals. After their fourth album "Paradise Lost" (1991), they split up due to frustration caused by problems with their new record company. 2001 saw the light of a new Cirith Ungol album which contained old and unreleased demos and songs, but no new material. The album was supported by both Greg and Rob, but not by Tim.

I'm Alive (Live At Up The Hammers Festival)

One Foot in Hell