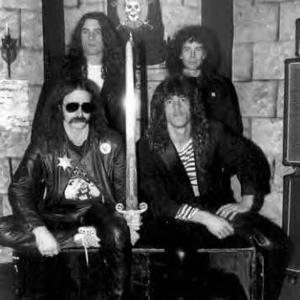 Brocas Helm was an American epic metal band from San Francisco, CA. In 1984 they signed with First Strike for the USA and Steamhammer (Licensing deal through First Strike) for Europe. They released their first album, "Into Battle", but after some disagreements (for example about the cover used for "Into Battle" was used without consent of the band) they mutually agreed to end the relationship, even though Brocas Helm still had an obligation for one album.

After a lot of shopping for a new label and little interest, they decided to create and release the "Black Death" LP themselves. For 5 years they worked hard in their Caverns of Thunder basement-studio.
After that, Brocas Helm made a couple of (unreleased) demos, mostly to get a label-deal so they could do a high-quality cd release. Meanwhile, although labels have showed some interest but not enough to actually sign Brocas Helm, Brocas Helm released the "Skullfucker" single.

Brocas Helm later released a live album, "Black Death in Athens", and a new opus, "Defender of the Crown".

In 2011 Brocas Helm announced their breakup at the German Keep It True festival. However, in May 2012 they performed at Ragnarokkr Metal Apocalypse in Joiliet, Illinois.

Defender Of The Crown