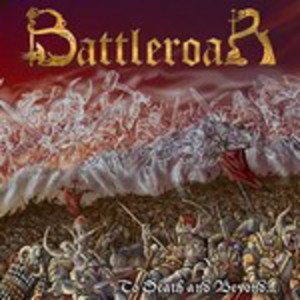 1) Battleroar is a traditional epic metal band formed in Athens in September 2000. The roots of the band's style sink deep into the sound of legendary 80s American and European bands such as Manilla Road, Omen, Cirith Ungol, Brocas Helm, Manowar, Jag Panzer and Heavy Load. The band's name was in fact taken from the lyrics to Heavy Load's song 'Singing Swords' ('I loved the battleroar').Their third album 'To Death and Beyond' was released in 2008 and received excellent reviews worldwide.

Battleroar is also known for being a good live band and they have played all over Europe, including Spain, Italy, Ireland, Belgium and Germany.
In 2009 the band parted ways with guitar player Manolis Karazeris and vocalist Marco Concoreggi. They were temporarily replaced by Stelios Sovolos on guitar and John Papanikolaou (ex Innerwish) on vocals. This line-up played some shows in Holland and Greece.
In September 2010 the band announced that Antreas Sotiropoulos (Everdome, Wolfcry) is the permanent new guitar player.
Currently the band is working on new music and rehearsing every week, while searching thoroughly for a new singer that fits with the band.

2) There is also a Hungarian Black Pagan Band called Battleroar.

To Death And Beyond