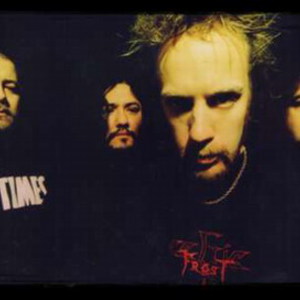 The band was later joined by guitarist Anton Reisenegger (Chile's Pentagram and Criminal) in place of the late Pintado.

Lock Up have played very few live shows. In 2009, the band announced that they would play the Damnation Festival that year. The line-up featured Embury, Barker, Lindberg and Reisenegger. It was touted as the band's last ever live show; however, they later booked more shows for 2010.

On December 3, 2010 Lock Up uploaded the first new piece of music in eight years, a track titled "Life of Devastation", to the band's official MySpace page. The song is set to appear on a split seven-inch single with Misery Index in 2011.

The band's third studio album, Necropolis Transparent, was recorded in November and December 2010 at HVR Studios in Ipswich, England, and features guest appearances by Peter T?gtgren and Jeff Walker (Carcass, Brujeria). It will be released on July 1 in Europe and July 12 in North America by Nuclear Blast Records.[3]

The Dregs Of Hades

Something Bitchin' This Way Comes