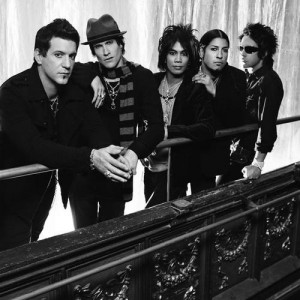 Buckcherry is a band formed in Los Angeles back in 1995. The band released two albums before dissolving in summer 2002 after lead singer Josh Todd left to pursue a solo career. The band reformed in 2005 with a completely new rhythm section to release their third album on April 11th 2006, entitled '15', the album consist of the bands two biggest hits to date "Crazy Bitch" and "Sorry" Sound Coming out during a time when rock music was dominated by post-grunge, nu-metal, and alternative rock, Buckcherry performed a sleazy Rock N' Roll that was more inspired by AC/DC...

Coming out during a time when rock music was dominated by post-grunge, nu-metal, and alternative rock, Buckcherry performed a sleazy Rock N' Roll that was more inspired by AC/DC, Guns N' Roses, and Black Crowes than Nirvana and Pearl Jam. On their debut record, they successfully trod heavy metal territory while managing to stay hard rock, while on Time Bomb, the band took their sleaze to an extreme with an excess of profanity and attitude.

Buckcherry was formed after Josh Todd met guitarist Keith Nelson through their tattoo artist after discovering a common love of AC/DC. The duo made a few demos before being joined by bassist Jonathan Brightman and drummer Devon Glenn. Buckcherry began preforming the Hollywood club scene, recieving a strong, local following due to their old school Rock N' Roll vibe.

The band added a second guitarist, Yogi, and were signed to DreamWorks Records shortly after. The band released their self titled debut in 1999 to critical praise. The album, produced by Terry Date, who produced albums for Soundgarden, Mother Love Bone, and Pantera, and ex-Sex Pistol Steve Jones, produced three modern rock chart hits with the singles, Lit Up, Check Your Head, and For The Movies.

The band's profile had been raised by summer 2000 with help from touring and decided to release their follow up album Time Bomb in 2001. The album was considered a disappointment after the very promising debut by many critics, and naturally, didn't fare as well as the first on the charts. The All Music Guide noted that "For a second record, it's surprising how jaded and nihilistic they are already."

Buckcherry performed opening dates for heroes AC/DC in the spring and recieved increased fanfare. However, in an unexpected turn of events, Josh Todd left the band to pursue a solo career in July 2002, leading to the bands demise.

The band was held on ice for over two years while Todd pursued a solo career. The post-grunge solo effort You Made Me turned out to be a failure, leading to Todd and Nelson to reform Buckcherry in early 2005. Joined by rhythm guitarist Stevie D., bassist Jimmy Ashhurst, and drummer Xavier Muriel, the band recorded their third album Fifteen and released it exclusively in Japan.

The band had been asked to open for M?tley Cr?e for a Japanese leg in December 2005, and began a headlining club tour in Spring 2006 a few weeks prior to the release of their third album, Fifteen. The album debuted at No.48 on the Billboard Top 200, selling over 26,000 copies in its 1st week. In May 2006, it was announced that the band had signed a deal with Atlantic Records via long-term deal with Eleven Seven Music. Their latest album is now being marketed by Lava/Atlantic, and reached a new peak of #41 on the Billboard Top 200 in the August 19, 2006 issue.

With "Crazy Bitch", Buckcherry gained their second major mainstream hit (following "Lit Up"), as the song hit #3 on the Mainstream Rock chart, #13 on Modern Rock, and became the first Buckcherry song to cross over to the Billboard Hot 100, where it hit #59, and also landed at #52 on the Billboard Pop 100, and #37 on Billboard's Hot Digital Songs chart. The song's success was largely driven by its success on the radio, as MTV rejected the band's initial video, demanding more than 80 cuts.

On Tuesday, May 30th, 2006, after a fan-made video for "Crazy Bitch" spread across the internet, the band, in a posting that appeared on their MySpace and Buckcherry.com, announced that they were accepting submissions from fans with their own videos, and would feature more interpretations of "Crazy Bitch" in the weeks to come. The original fan video was later submitted to MTV, before being passed over in favor of an edited version of the original clip, with added live footage.

The Best Of Buckcherry