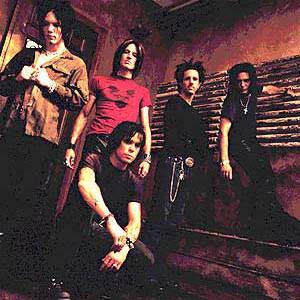 Beautiful Creatures are an American hard rock group formed by guitarist Dj Ashba (Bulletboys) and Joe Lest&eacute; (Bang Tango) in Los Angeles, California in 2000. The group's lineup was rounded out by guitarist Anthony Focx, bassist Kenny Kweens (Shake The Faith, Villains Of Vaudeville) and drummer Glen Sobel. They initially used the name Hellstar before settling on Beautiful Creatures and going on to play shows with Kiss and Marilyn Manson. They released debut album Beautiful Creatures in 2001, through Warner Bros., and toured in support before being dropped by the label.

Eventually the group returned adding guitarist Alex Grossi (Angry Salad, Quiet Riot, Adler's Appetite) and drummer Matt Starr for the recording of the second album, Deuce, however by the time it was released, in 2005, both Grossi and Starr had left the group, replaced by guitarist Mark Simpson (Flotsam and Jetsam) and drummer Timmy Russell (Bang Tango).

Since 2007, the group has went through a number of lineup changes, most notably bassist Kenny Kweens departure to join L.A. Guns, leaving only Lest? and Focx the only remaining members from the original lineup.