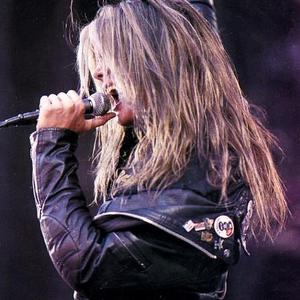 Sebastian Bach was born Sebastian Philip Bierk in the Bahamas on April 3, 1968. Despite rumors to the contrary, his legal last name is still "Bierk", not "Bach." Sebastian Bach has played in numerous unknown and short-lived bands (e.g. Herrenvolk, Madam X, V05 and Kid Wikkid), and received a demo from Skid Row in 1987. Skid Row signed for Atlantic Records and released their self-titled debut album in 1989. Bach was the frontman in Skid Row until he was dismissed in 1995.

Sebastian Bach has played in numerous unknown and short-lived bands (e.g. Herrenvolk, Madam X, V05 and Kid Wikkid), and received a demo from Skid Row in 1987. Skid Row signed for Atlantic Records and released their self-titled debut album in 1989.

Bach was the frontman in Skid Row until he was dismissed in 1995.

In 1996, Bach formed a rock supergroup, The Last Hard Men, with Frogs guitarist Jimmy Flemion, The Breeders lead guitarist Kelley Deal, and Smashing Pumpkins drummer Jimmy Chamberlin. The group recorded a full-length, self-titled album for Atlantic Records, who then optioned not to release it. In 1998, it was released on Kelley Deal's label, Nice Records, with no fanfare and a very limited pressing of 1000 CDs, which may have been sold via mail order only.

On November 28, 2001 Sebastian appeared at New York Steel, a benefit concert in response to 9/11. He appeared early in the show, left to perform on Broadway, and returned at the end when all performers gathered for a final song.

In October 2002, Sebastian was signed to perform in the national touring production of Jesus Christ Superstar and played the role of Jesus successfully in the show until April 2003, when he was fired for alleged diva-like behavior. He is currently working on a DVD version of VH1's Forever Wild that will be released in June.

Sometime in 2003, Sebastian tried out for Velvet Revolver before the band found Scott Weiland, but was turned down because, according to Slash, "We sounded like Skid Row!" Many fans of the band frequently express frustration that Bach was not selected because his vocal range would have allowed them to cover more GN'R songs during shows.

He has a role on the WB television show Gilmore Girls as Gil, the guitarist in Lane Kim's band. The other members of the band, all teenagers, initially objected to his age, but he proved to be a talented guitarist and remained in the band.

In 2005, Bach cooperated with Henning Pauly to be the singer on the Frameshift album called An Absence of Empathy which has been released in April 2005.

On May 12 and May 14, 2006 at Guns N' Roses' warm up show at the Hammerstein Ballroom in New York City, Sebastian joined Axl on stage for the song "My Michelle". He joined Axl and gang for a third time the following night (May 15) to sing "My Michelle" once again. He also joined them for their Pre-Download Festival show in the Apollo Hammersmith, London, singing My Michelle. Rose introduced Bach by saying that the two had rekindled their friendship in the previous week after 13 years of not speaking. On June 4, 9th & 11th he again joined Rose on stage at the 2006 Gods of Metal Festival (Milan), Download Festival in RDS Dublin and in Donington, respectively. He also appeared on several other tour dates during GN'R's European tour. On September 23, 2006, he joined Axl on stage once again at KROQ's Inland Invasion festival in California for a rendition of "My Michelle".

Bach stars with Ted Nugent, Evan Seinfeld, Jason Bonham and Scott Ian on the VH1 show "SuperGroup" as of May 2006. The musicians formed a band called Damnocracy for the reality show, during which they lived in a mansion in Las Vegas for twelve days and created music. During the show, he became particularly close to Ted Nugent, whom he looked to as a father figure. This was acknowledged several times on the show. He also appears to have developed good relationships with Evan Seinfeld. However, at a November 5 2006 Guns N' Roses concert in Huntington, West Virginia, Bach referred to a SuperGroup episode where he promised Ted he would quit drinking, and claimed that he had lied. He then went on to say, "Fuck Ted Nugent. He can go skin fucking baby seals in Canada, but I can't enjoy an American Budweiser? Fucking Ted Nugent!" and again at a December 4 show in Winnipeg, Manitoba stating, "You know how I promised Ted Nugent that I'd quit drinking? I fucking lied! He can go skin fucking baby seals, but I can't enjoy a fucking Labbatt's Blue?".Sebastian also said during the dec.7th show in Edmoton alberta "Us canadians like to have a drink once in a while right? Remember that one episode of super group where i stopped drinking? I LIED!" Bach had previously said that he had taken offense with disparaging comments Nugent had made about Dimebag Darrell.

In August 2006, it was reported that Bach is set to appear in the upcoming seventh season of Trailer Park Boys. He is playing the part of a model railroad enthusiast.

On 13 September 2006, during a show at Selinas in Sydney, Bach stormed off stage during the encore. After two earlier similar incidents, Bach had warned the crowd that the throwing of any more plastic bottles and/or cans onto the stage would lead to him walking off. As the encore began (Youth Gone Wild), Bach was hit by a plastic cup, threw down the mic and left the stage.

On September 28, 2006, he appeared on Celebrity Duets singing with Hal Sparks. Bach later was on the road with Guns N' Roses, touring around the world until late 2006.

In 2007 he released the album 'Angel Down', which he worked on for the past seven years. The album contains a mix of rock and metal.