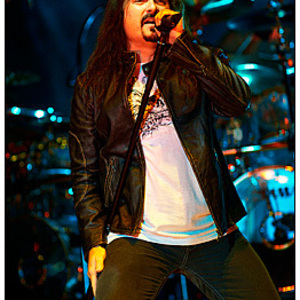 Kevin James LaBrie (born May 5, 1963) is a Canadian vocalist who is best known for being the lead singer in progressive metal band Dream Theater. He has released several solo albums (progressive rock/metal style) as well as collaborating in various projects. He was born in Penetenguishene, Ontario, Canada and started singing and playing drums at age 5. By his mid-teens, LaBrie was a member of several bands as a singer and/or drummer, and in 1981, at age 18, he moved to Toronto to further his musical pursuits.

He was born in Penetenguishene, Ontario, Canada and started singing and playing drums at age 5. By his mid-teens, LaBrie was a member of several bands as a singer and/or drummer, and in 1981, at age 18, he moved to Toronto to further his musical pursuits. He currently still resides in Toronto, with his wife Karen, daughter Chloe, and son Chance.

Formerly of the band Winter Rose, he sent a sample to Dream Theater when they were auditioning for a new vocalist after firing their previous one, Charlie Dominici. He subsequently got the job, debuting on DT's seminal progressive metal album "Images and Words", and reverted to using James as his first name to avoid confusion, as there already was a Kevin, as well as two Johns in the band at the time.

He participated to Ayreon's rock opera "The Human Equation", where he had one of the main parts as the character "Me", released in 2004. James had earlier said that participating to an Ayreon record would be a dream come true, and Arjen Anthony Lucassen isn't the type of person to spoil such a chance.

He also lent his voice to the conceptual progressive project Frameshift from Henning Pauly in its first album "Unweaving the Rainbow".

It's important to note that even though his 2005 album, "Elements of Persuasion", was released under his name, it is actually the same band line-up as Mullmuzzler with the exception of guitarist Mike Keneally.

He also sang as one of the three tenors of TSR (aka True Symphonic Rockestra). Somewhat thematically consistent with being one of the voices which comprised TSR, James was offered a small, custom-tailored role on cable television's thug-classic The Sopranos. He was to play the hackneyed part of a struggling but gifted young opera singer, perpetually short of fame and inescapably controlled by the invisible marionette strings of a coerced allegiance to the Family. Jokingly chosen based on James' last name, the equally stereotypical mob moniker of 'Jimmy the Cheese' was adopted for the character.

An assistant producer for the show had seen LaBrie perform several times with Dream Theater and felt that the singer had the effortless stage presence and true voice necessary to convincingly portray this briefly featured character. Not uncommon in the mercurial environment of the entertainment industry, the opportunity never came to fruition due to scheduling incompatibilities, contractual obligations and myriad other manipulations by the fickle hands of fate.