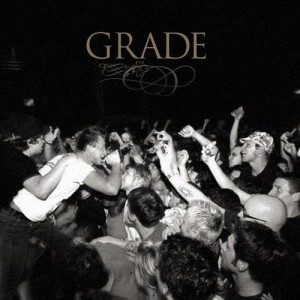 Grade was formed in January, 1994 in Burlington, Ontario, Canada and have had a on and off love affair with hardcore and punk rock for over 15 years. They are comprised of singer Kyle Bishop, guitarists Greg Taylor and Shawn Magill, bassist Matt Jones and a revolving cast of drummers, currently featuring Matt Richmond. Grade broke up in 2002, but reunited in the summer of 2006 for 2 shows and again in 2009 to begin working on their first new material in almost 10 years.

Grade's first album And Such Is Progress, was included in Alternative Press's 10 Essential Metal-core Classics, and in 2008 they were featured in AP Issue 240 as one of the 23 bands who helped shape punk, alongside such legendary bands as BLACK FLAG, BAD BRAINS, FUGAZI, CRO-MAGS, SUNNY DAY REAL ESTATE, UNBROKEN, DESCENDENTS, DRIVE LIKE JEHU and HUSKER DU.

Grade's albums (LP) include Such is Progress (1996)(1998 re-issue), Separate the Magnets (1997), Under the Radar (1999), The Embarrassing Beginning (2000), and Headfirst Straight to Hell (2001). They have played and toured with hundreds of influential bands like Fugazi, Jimmy Eat World, At The Drive-In, Cave-In, The Explosion, Taking Back Sunday and were signed to Victory Records.