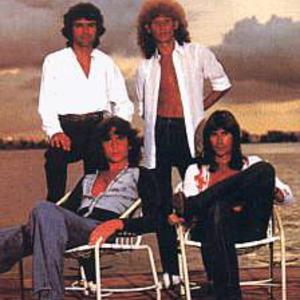 Pat Travers was born and raised in Toronto, Canada. Soon after picking up the guitar at age 12, he saw Hendrix perform in Ottawa. Inspired by Hendrix, as well as other artists including Jeff Beck, Eric Clapton and Jimmy Page, Travers began playing in bands early in his teens; his first bands were The Music Machine Red Hot and Merge, which played in Quebec-area clubs. While performing with Merge, he was noticed by rock artist Ronnie Hawkins, who invited Travers to perform with him. Travers moved to London and landed a deal with the Polydor label in his early 20s.

While performing with Merge, he was noticed by rock artist Ronnie Hawkins, who invited Travers to perform with him. Travers moved to London and landed a deal with the Polydor label in his early 20s. His self-titled debut album was released in 1976. Travers gained a strong following in his native country with his accessibility during his concerts. He often mingled with fans, sometimes inviting them to join him on stage.

His popularity with fans and his music skill combined to give Travers a reputation as one of the rising stars of Guitar Rock in the mid 1970s. One of his most popular songs is a cover of a Little Walter blues classic, "Boom Boom Out Go the Lights", Other popular songs included "Snorting Whiskey", "Heat in the Street", "I Just Got Paid Today" and "Stevie". The albums Go For What You Know and Crash and Burn from the early 1980s, increased his profile to that of a super star of the Guitar Rock world.

Although his commercial popularity began to fade a little toward the start of the 1990s, Travers has continued to record and tour regularly, and has a very loyal fan base. In 2001 he was part of the ?Voices of Classic Rock? tour, and had a hit song with Leslie West from the band Mountain called "Rock Forever". In 2004 he started a project with the great session drummer Carmine Appice and started touring the US; as of now there are 3 albums released. Travers was still rocking in 2006 with the Power Trio playing cover tunes from bands such as Led Zeppelin, Montrose, Queen, Trapeze under the album name: P.T. Power Trio 2, and they toured Europe in November 2006.

Live at the Iridium NYC

Go For What You Know (Live)