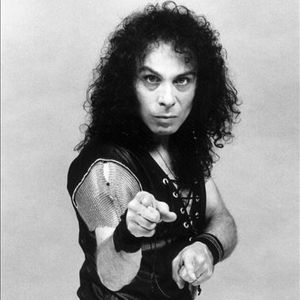 Ronnie James Dio is generally credited as the originator of the famous "mano cornuta" (or "devil horns") symbol in the metal world. According to him, his grandmother used to make the symbol as a sigil to ward off evil. Dio started using the gesture onstage in the early days of his career.

Roger Glover, the bass player of Deep Purple, had, as a solo artist, a world wide hit in 1974, "Love is All". It had, for those days, a very special videoclip, with a frog. It was Ronnie James Dio who did the vocals for that song.

In October 2006, it was confirmed that Dio would be joining Black Sabbath members Tony Iommi, Geezer Butler, and former Black Sabbath drummer Vinny Appice to tour under the moniker Heaven & Hell, the title of the first Dio era Black Sabbath album. They chose the name Heaven & Hell as Tony Iommi and Geezer Butler were still in Black Sabbath with Ozzy Osbourne and felt it was best to use a different moniker for the Dio version of the band. Original Black Sabbath drummer Bill Ward was to be involved in this project, but he later withdrew. In 2008 the band completed a 98-date world tour. The band released one album under the Heaven & Hell name, The Devil You Know, to critical and commercial acclaim. They also had planned to release a follow-up in 2010, but Dio died of stomach cancer on May 16 of that year.