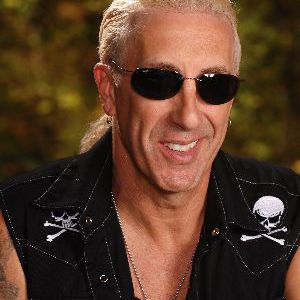 Dee Snider (born David Daniel Snider on March 15, 1955 in Massapequa, Long Island, New York, United States) is an American musician, actor and television/radio host. Snider is best known as the frontman for American hard rock band Twisted Sister. He is somewhat of a cult icon in the heavy metal community with his distinctive look and personality. As a child he sang in a church choir, several school choruses, and Baldwin HS Concert Choir.

As a child he sang in a church choir, several school choruses, and Baldwin HS Concert Choir. He also was selected for the All State Chorus by singing Henry Purcell's "Strike the Viol". [2] He developed a habit of dressing differently from his peers and a strong desire to become a singer in a makeup band.

In 1975 Snider changed several rock bands, and in early 1976 he joined the recently formed Twisted Sister and became the only song writer of the band thereafter.

On MTV in the 80's before Headbanger's Ball, the first Heavy Metal show to feature all metal videos was called Heavy Metal Mania. The first show aired in June of 1985. Metal mania was hosted by Dee Snider and featured metal news, interviews with metal artists, in studio co-hosts, etc..

In the late 1980s, after Twisted Sister was disbanded, he formed Desperado, a band featuring ex-Iron Maiden drummer Clive Burr, ex-Gillan guitarist Bernie Torme, and bassist Marc Russel. The group's only album Ace has never been officially released but was heavily bootlegged on CD (under the title Bloodied But Unbowed).

In 1985, a Senate hearing was instigated by the Parents Music Resource Center (PMRC), who wanted to introduce a parental warning system that would label all albums containing offensive material. The system was to include letters identifying the type of objectionable content to be found in each album (i.e. O for occult themes, S for sex, D for drugs, V for violence, etc). Dee Snider, John Denver, and Frank Zappa all testified against censorship and the proposed warning system. Such a system was never implemented, but the result of the trial brought about what is now the generic "Parental Advisory: Explicit Content" label.

In the 1990s, he formed Widowmaker, with Joe Franco (good friend to Twisted Sister, and drummed on the Love Is For Suckers album), Al Pitrelli, and Marc Russel. They recorded two albums with limited underground success, titled Blood and Bullets, and Standby For Pain.

In 1998, he wrote and starred in the horror film Strangeland. He has also penned the script to a sequel which has the working title of Strangeland 2: Cult of Personality. As of October 2006, it has yet to receive a greenlight by any major studio. The project remains a top priority of Snider's.

From June 1999 to August 2002, he hosted a morning radio show on a Hartford, Connecticut Clear Channel station, Radio 104 (104.1 FM WMRQ), called Dee Snider Radio. His show returned to the air at night in August 2004 on 93.3 WMMR in Philadelphia, Pennsylvania until June 2005. He fondly referred to his listeners as his "Peeps", and "DEE" euro stickers, printed by the station, could be seen on the bumpers of his fans' cars throughout Connecticut, New York, and Massachusetts. Other members of the morning show included Nick Lentino, Beth Lockwood, "Psycho Dan" Williams, Sean Robbins, and "Darkside Dave" Wallace. He frequently featured high-profile guests, including his friend and Kiss singer/bassist Gene Simmons.

In 2001 he was the voice of Gol Acheron, the main villain for the PlayStation 2 videogame Jak and Daxter: The Precursor Legacy.

In 2002 he re-joined with the reunited Twisted Sister, and played himself in the 2002 TV-movie Warning: Parental Advisory.

In 2003 he appeared with actor Arnold Schwarznegger, during his drive to recall incumbent California Governor Gray Davis. Snider sang the Twisted Sister hit, "We're Not Gonna Take It," which was adopted by the Schwarzenegger campaign.

In 2004 and 2005 he was the narrator for a live show known as Van Helsing's Curse which tours the US around Halloween giving a mix of famous music with dark overtones and an occasional part of a storytelling to accompany the music. The concert has also been released on CD.

As of 2005 Snider is the host of the nationally syndicated House of Hair radio show. He currently lives part-time in East Setauket, New York.

Snider is also a narrator for many shows and specials on VH1.

Snider was featured as the 'voice' in the bumpers for MSNBC's 2001/2002 "Fiercely Independent" branding campaign.

Snider returned to radio in June 2006 with Fangoria Radio on Sirius Satellite Radio.

Snider has been married to his wife Suzette since 1981. They have 4 children. They are Jesse, Shane, Cody, and Cheyenne.

For The Love Of Metal

We Are the Ones

Never Let The Bastards Wear You Down