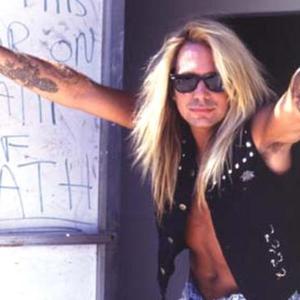 Vincent Neil Wharton (born February 8, 1961 in Hollywood, California), better known as Vince Neil is the lead singer for American heavy metal band M&ouml;tley Cr&uuml;e. Neil was born to Odie and Shirley Wharton in 1961 in Southern California. During the 1960s, his family moved around, from Inglewood, California to Watts, before finally settling in Compton, California. Growing up in Compton was sometimes tough, he once even had his face and chin slashed by a gang member.

Neil was born to Odie and Shirley Wharton in 1961 in Southern California. During the 1960s, his family moved around, from Inglewood, California to Watts, before finally settling in Compton, California.

Growing up in Compton was sometimes tough, he once even had his face and chin slashed by a gang member. Neil soon learned to become street-wise, but was in some trouble at school, he got kicked out, later finding out he has a form of dyslexia. As well as an interest in music, as a teen Neil was also interested in surfing and baseball.

He was discovered while performing with his band, Rock Candy, and joined M?tley Cr?e in 1981. That same year, he married his first wife, Beth Lynn and M?tley Cr?e released its first album, Too Fast for Love. In 1983, M?tley Cr?e released Shout at the Devil, a blockbuster success that established the band as one of the biggest acts of the 1980s. In 1984, after a tour with Ozzy Osbourne, Neil was in a drunk driving accident near Redondo Beach, California. The passenger in his 72' De Tomaso Pantera, Nicholas "Razzle" Dingley, the drummer of Hanoi Rocks, died from his injuries. Beth Lynn and Neil divorced in 1985. Following a prison sentence, Neil regrouped with M?tley Cr?e to record Theatre of Pain (1985) and Girls, Girls, Girls (1987). He married Sharise Ruddell in April 1988. The band released their highest-selling album, Dr. Feelgood, in 1989 after going through rehab .

Neil left M?tley Cr?e to pursue a solo career in February 1992. According to rumors in the band's autobiography, The Dirt, he was fired because he was more interested in car racing than in the band (he was racing in the Indy Lights open wheel developmental series at the time). In 1992 he released his first solo offering, a single "You're Invited (But Your Friend Can't Come) featured on the Encino Man soundtrack. Exposed, his solo debut,debuted at #13 on the Billboard charts, was released in mid-1993. The album featured Steve Stevens (formerly Billy Idol's guitarist and Atomic Playboys founder), Dave Marshall, Robbie Crane, and Vik Foxx.. It sold only about 300,000 copies in the US, just about as many as M?tley's 1994 Neil-less album M?tley Cr?e with singer John Corabi (previously of The Scream). All previous M?tley Cr?e albums had sold at least one million copies.

The same year, Carved In Stone, an indus-glam metal oriented album produced by the Dust Brothers, sold less than 100,000 copies in the US, and Neil's contract with Warner Bros. Records. eventually came to an end. Some versions of the album feature "Skylar's Song", written by Neil only.

By 1997, both Neil's solo career and M?tley Cr?e's fortunes were declining and he accepted their invitation to rejoin the band. They released the album Generation Swine which debuted at #4 on the Billboard charts. It wasn't long before tension erupted again, this time prompting Tommy Lee to leave the band. They replaced him with Randy Castillo, but things came to a halt when Castillo died from cancer in 2002.

In May 2000, Neil married Playboy Playmate Heidi Mark. They divorced in August 2001.

A regular customer of the Moonlite Bunny Ranch, in July 2003 Neil was charged with battery after a prostitute at the ranch alleged that he grabbed her around the throat and threw her against a wall. A year earlier, he had pleaded no contest to the charge that he had punched and knocked down record producer Michael Schuman.

Also in 2002, Neil was one of the cast members on the first season of The Surreal Life.

In 2003, Vince Neil was featured (as a solo act) in the "Rock Never Stops Tour" along with other '80s hard rock bands.

Neil married Lia Gerardini in January 2005. The ceremony was officiated by ordained minister and fellow cast member from The Surreal Life, MC Hammer.

In 2004, Vince appeared again on TV for the special Remaking Vince Neil, which showed him trying to recharge his solo career. He also recorded the single "Promise Me" produced by the acclaimed Desmond Child which has yet to be released commercially, but rumored to be on his forthcoming solo album. However, it turned out to be M?tley Cr?e that got the career boost as Neil and Tommy Lee put aside their differences and toured in support of the compilation album Red, White and Cr?e which was supported by an extensive world-wide tour dubbed Carnival of Sins, which featured near-naked female acrobats, fire-breathers and a midget.

Live One Night Only