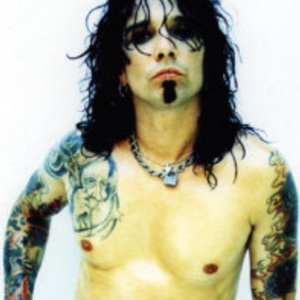 John Corabi (born on April 26, 1959 in Philadelphia, Pennsylvania) is a heavy metal singer and guitarist who has worked with such bands as Angora, The Scream, M?tley Cr?e, Union and ESP (both with former KISS lead guitarist Bruce Kulick), Ratt (as a lead guitarist), Twenty 4 Seven (with his Ratt bandmate Bobby Blotzer), Zen Lunatic, Brides Of Destruction, and Angel City Outlaws (with his Ratt bandmates Robbie Crane and Bobby Blotzer, and former Ratt guitarist Keri Kelli).

When M?tley Cr?e parted ways with lead singer Vince Neil in 1992, Johh Corabi was brought in as his replacement. Nikki Sixx and Tommy Lee believed that the band would benefit from the addition of John's voice (which was much deeper and more powerful than Vince's) and having another musician contribute to the songwriting. However, John's voice did not have the same pop sensibility as his predecessor. John only recorded one album with the band, the self-titled M?tley Cr?e album in 1994 and by 1996 he was replaced by the returning Vince Neil.

Brides Of Destruction - Here Comes The Brides (US, 2004). John is featured on second guitar on the whole album.

John performed some songs on the Karl Cochran solo album Voodooland - Give Me Air released in 2005. For more inforrmation on this album visit this link here. 2005 also saw the release of the first Union DVD, Do Your Own Thing Live. This DVD continas two full length concerts and bonus material.

Union played two live shows in Tokyo Japan in January 2005 and toured Europe in November and December 2005.See photos of Union in Japan in 2005 here at *Rock and Roll All Nite Dot Com

John has also toured Europe with ESP in May 2005. John is also touring the USA with RATT over the summer of 2005.

In February 2006 John was back in Japan with ESP (Eric Singer Project) for some lives shows and meet and greets with the fans. ESP also went to Australia in April 2006 for a show in Sydney and Melbourne.

John is working on a solo album for release in 2007.
He's also giving guitar clinic's at this moment through out the states.

Live 94 (One Night In Nashville)