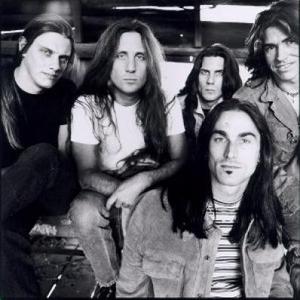 Jackyl is an American rock and roll band formed in 1990. Jackyl's sound has been described as a combination of hard rock, heavy metal and Southern rock. Their music has also sometimes been categorized as glam metal. The band is probably best-known for its song "The Lumberjack", which features a chainsaw solo by lead singer Jesse James Dupree. Dupree would rev the chainsaw's engine or use the chain brake to slow the engine down to keep the beat. He would also perform this stunt live and the number would climax with Dupree slicing up a wooden stool onstage.

The band appeared at Woodstock '94 in Saugerties, New York.

In 1992 Jackyl played an impromptu concert in front of a K-Mart in Georgia. K-Mart refused to sell the band's album so they did this to make a statement. Footage of the event was used for their music video of their single "I Stand Alone".

Jackyl's 1997 hit song "Locked and Loaded" featured guest vocals from AC/DC's Brian Johnson. Johnson would also team up with the band for their 2002 album Relentless.

Less than a month after the events of the September 11, 2001 attacks, Jackyl recorded and released "Open Invitation," which received wide airplay and featured lyrics that included, "I hate you bin Laden" and "You've got an open invitation to kiss our ass." The song mixed in clips from George C. Scott's portrayal of George S. Patton giving a speech to his soldiers in the movie Patton and President George W. Bush reading from the Bible's Shepherd's Psalm Psalm 23:4. The band explained their song and lyrics as: "This song is written in the key of 'ANGER' that such a thing can happen in this country. It's not directed toward any religious group or race of people. It is directed toward those 'assholes' responsible."

When Moonshine And Dynamite Collide

Live At The Full Throttle Saloon