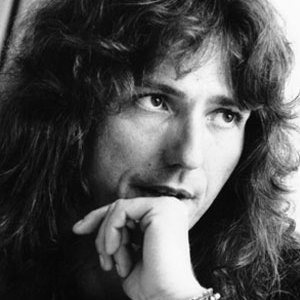 David Coverdale (born September 22, 1951 in Saltburn-by-the-Sea, England) is a rock vocalist most famous for his work with the British hard rock band Deep Purple, and his later band Whitesnake. Coverdale was largely unknown until he replaced Deep Purple vocalist Ian Gillan in 1973. He was a Boutique clerk in Redcar, Yorkshire when he sent in an old Boy Scout picture of his along with a demo tape to Deep Purple.

Coverdale was largely unknown until he replaced Deep Purple vocalist Ian Gillan in 1973. He was a Boutique clerk in Redcar, Yorkshire when he sent in an old Boy Scout picture of his along with a demo tape to Deep Purple. Impressed by his deep blues timbre, Coverdale was recruited to the band, sharing vocal duties with bassist/vocalist Glenn Hughes. His three year tenure ended in March 1976 when the band finally split up. Moving to Germany, he laid down a vocal track on a multi-artist project organised by Eddie Hardin, released by RCA Records as Wizard's Convention.

Unable to perform in England for contractual reasons, Coverdale then recorded vocals for both his solo albums in Germany while the backing tracks were laid down in London. The backing musicians who played on these albums were retained for touring purposes, and effectively became the original line-up of Whitesnake, Coverdale's personal group.

According to British heavy metal magazine Kerrang!, in 1982, with Whitesnake's lineup and career in flux, Coverdale was reportedly considered for the vocalist position with Black Sabbath, along with the late drummer Cozy Powell, following the departure of Ronnie James Dio and Vinny Appice. Coverdale declined (though Powell would later join Sabbath), and Sabbath hired Coverdale's predecessor in Deep Purple, Ian Gillan. Powell joined Coverdale for Whitesnake's Slide It In album and tour. There are two versions of this album; the European one having Colin Hodgkinson on bass with long-time Whitesnake members Mel Galley and Bernie Marsden on guitar, and the U.S. version having Neil Murray on bass and John Sykes, formerly of NWOBHM band Tygers of Pan Tang and Thin Lizzy's final lineup replacing Marsden on guitar.

A series of blues- influenced hard rock records followed through the eighties, gaining popularity in the UK and Europe, although US success reamined elusive, until the multi-platinum '1987' written with ex Thin Lizzy guitarist John Sykes hit the racks. Coverdale kept Whitesnake going thereafter until their dissolution in 1994 when Geffen Records elected not to renew the contract. At that time, Coverdale worked with former Led Zeppelin guitarist Jimmy Page on the Coverdale-Page project.

Inevitably, another Whitesnake re-formation was around the corner. Whitesnake's 1997 comeback album represented a return to Coverdale's R'n'B heritage. As he told the press on its release, he had tired of the more cartoonish elements of Whitesnake's image:

"I've had enough of the Tarzan impressions. I wanna sing. Less strain on the old Calvins."

This direction was also pursued on Coverdale's third solo album, Into the Light, although there was also the occasional lapse into hard rock bluster mode. Now settled in Lake Tahoe, Nevada, Coverdale looks set to remain a fixture in rock's middle-aged hierarchy.

In December 2002, Coverdale re-reformed Whitesnake for an American and European tour, with Tommy Aldridge on drums, Marco Mendoza (bass), Doug Aldrich (guitar), Reb Beach (guitar) and Timothy Drury (keyboards). In 2004-2005 saw Whitesnake embark on a tour of the USA, South America and Europe.

Coverdale was married to actress Tawny Kitaen from February 17, 1989 until their divorce in April 1991. Kitaen was known for her provocative appearances in Whitesnake's music videos for "Here I Go Again" and "Is This Love." Currently, he is married to Cindy Coverdale, a renowned author of books (most recent The Food That Rocks).