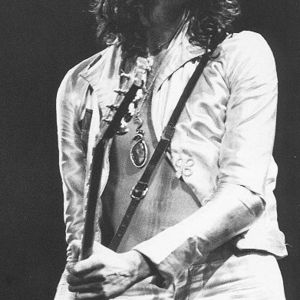 James Patrick "Jimmy" Page, (born January 9, 1944) is widely considered one of the greatest and most influential guitarists in rock. He was a founding member of Led Zeppelin and, prior to that, a member of The Yardbirds from late 1966 through 1968. Before he was a member of those two groups, however, Page had been one of the most in-demand studio guitarists in England from the time he was a teenager.

After Led Zeppelin disbanded, Page worked on some critically acclaimed solo material, played in supergroups The Honeydrippers and The Firm, recorded two albums with his Led Zeppelin times buddy Robert Plant and worked as a session guitarist.

Page's past experiences both in the studio and with the Yardbirds were very influential in contributing to the success of Led Zeppelin in the 1970s. As a producer, composer, and guitarist he helped make Led Zeppelin a prototype for countless future rock bands, and was one of the major driving forces behind the rock sound of that era, influencing a host of other guitarists. Allmusic states that "just about every rock guitarist from the late '60s/early '70s to the present day has been influenced by Page's work with Led Zeppelin". For example, his sped up, downstroke guitar riff in "Communication Breakdown" is cited as being the inspiration for guitarist Johnny Ramone to develop his punk-defining, strictly downstroke guitar strumming, while Page's landmark guitar solo from the song "Heartbreaker" has been credited by Eddie Van Halen as being the inspiration for his two-hand tapping technique after he had seen Led Zeppelin perform in 1971. Page's solo in the famous epic "Stairway to Heaven" has been voted by readers of various guitar magazines, including Guitar World and Total Guitar, as the greatest guitar solo of all time, and he was named 'Guitarist of the Year' five years straight during the 1970s by Creem magazine. In 2001 he was voted London's greatest guitarist in Total Guitar magazine's poll of the greatest 12 British guitarists. In 2003, Rolling Stone magazine named him number nine on their list of the "100 greatest guitarists of all time".