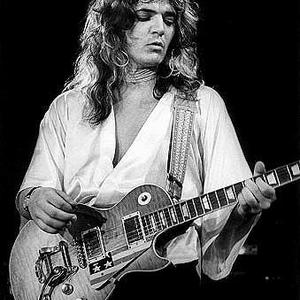 American-born guitarist with a swedish father and a mother of syrian descent. Tommy Bolin began playing in bands around Sioux City as a youth before moving to Boulder Colorado in his late teens. He had played in a band called American Standard before joining Ethereal Zephyr, a band named after a train that ran between Denver and Chicago. When record companies became interested, the name was shortened to Zephyr.

Tommy Bolin began playing in bands around Sioux City as a youth before moving to Boulder Colorado in his late teens. He had played in a band called American Standard before joining Ethereal Zephyr, a band named after a train that ran between Denver and Chicago. When record companies became interested, the name was shortened to Zephyr. This band included Bolin on guitar, David Givens on bass, and Givens' wife Candice on vocals. The band had begun to do larger venues, opening for more established acts such as Led Zeppelin. Their second album, entitled Going Back to Colorado, featured a new drummer, Bobby Berge, who would pop up from time to time in musician credits in album liner notes from Bolin's later projects.

After this record, he decided to move on to more progressive projects. In 1972 Bolin, at the age of 20, formed the fusion jazz-rock-blues band Energy. While the band never released an album during Bolin's lifetime, several posthumous releases have demonstrated the band's power and Bolin's artistic vision. He also played on Billy Cobham's Spectrum album, which included Bolin on Guitar, Billy Cobham of Mahavishnu Orchestra on drums, Leland Sklar on bass and Jan Hammer (also of Mahavishnu Orchestra) on keyboards and synthesizers. This was a fusion-powerhouse line up that resulted in a most impressive album that showcased Bolin's playing at his creative peak.

1973 found him as Domenic Troiano's replacement, who had replaced Joe Walsh, in the James Gang. He had two records with this band: Bang! in 1973 and Miami in 1974.

After the Miami tour, Bolin wanted out of the James Gang. He went on to do session work for numerous rock bands and also with a number of Jazz artists. Bolin is featured, for example, on Alphonse Mouzon's (of Weather Report) album Mind Transplant.

Bolin signed with Nemperor records to record a solo album. His main idea was to bring in a vast array of musicians drawn from all the session players he had known. With the encouragement of the Beach Boys' Brian Wilson, Bolin decided to do his own vocals on this album as well. Session players on this record included David Sanborn, Jan Hammer, Stanley Sheldon, Phil Collins (of Genesis) and Glenn Hughes (of Deep Purple), to name a few. During the recording of this album, he was contacted to replace Ritchie Blackmore in Deep Purple.

In the start of 1975 Bolin contributed some studio guitar assistance to Canadian band Moxy during the recording of their debut album, with the original vinyl Lp for Moxy I being especially sought-after by die-hard Bolin fans.Tommy Bolin Archives Then later in 1975 saw the release of Bolin's first and highly anticipated solo record, Teaser (on the Nemperor label), and Deep Purple's Come Taste the Band (on the Purple label). The Deep Purple world tour that followed allowed Tommy to showcase one song per night from Teaser. During this period, it had become apparent that he had a heroin addiction. This addiction led to a rumor that Deep Purple's concerts in Japan were marred by Bolin being unable to play due to a paralyzed left arm, the result of a bad injection.Bolin himself later told the story in interviews that he had slept on his hand and needed accupunture to make the nerves work again. Indeed he admitted that he was basically unable to play. Also David Coverdale later said that he and bass player Glenn Hughes and Jon Lord had to fill in the gaps Tommy left.[citation needed] In truth, the recordings first released of those concerts on Last Concert in Japan were improperly mixed, leaving the guitar parts out for the most part.[citation needed] The subsequent release of This Time Around: Live in Tokyo 1975 had a much improved mix, including Bolin's playing. (dubious..ed.) Many critics agree Bolin was in good form for the concerts:[citation needed] certainly, he did not suffer from paralysis at the concerts. Nevertheless, the live character for Deep Purple's shows began to vary with this lineup.

Bolin was back on the road with his solo band and planning a second solo record. The band had a rotating cast of players which included Norma Jean Bell (formerly of Frank Zappa's band) on saxophone and eventually Tommy's younger brother Johnny Bolin on drums. After top brass from Nemperor witnessed Bolin (while highly intoxicated) falling off the stage during a performance, he was summarily dropped from that label.

This proved to be something of a blessing in disguise when CBS signed him shortly afterwards. In 1976 he began to record Private Eyes, his second solo record. This album was to be a double album, but financial woes cut down on this project and a single album was released. The album is a decent effort, considering the level of his difficulties with substance abuse when he made it.

Bolin's tour for Private Eyes proved to be his last. The cost of keeping a band on the road and his heavy drug addiction forced him into being a supporting act. In his last concert dates, he opened for Peter Frampton and Jeff Beck. His last tour was marred with technical problems and unreliable performances. However, his legendary final show, in which he opened for Jeff Beck on December 3, 1976, encored with a barnburning rendition of "Post Toastee". He posed for a photo with Jeff Beck after the show. In one account of his last hours, Bolin was found unconscious shortly following the show. The management, who by some reports did not want any more negative publicity about the tour, had him taken to his room with his girlfriend to look after him. (In other accounts, his death followed a night of hard partying that had involved beer, champagne, cocaine and finally, heroin. By morning, Bolin's health had become worse. His girlfriend feared for his life and called for an ambulance. When paramedics arrived, Tommy Bolin was pronounced dead. He was 25 years old.

In 1999, Glenn Hughes (of Trapeze and Deep Purple) did a 4-5 city tribute tour in Texas, with Tommy's brother Johnny (of Black Oak Arkansas) on drums, playing Tommy's songs.

Shake The Devil - The Lost Sessions

From The Archives Volume 2