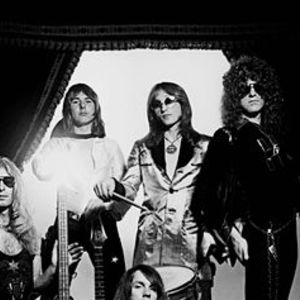 Mott the Hoople were a glam rock group formed in 1968 in Herefordshire, England near the Welsh border. They were led by Ian Hunter until his departure in 1974. The band would break up in 1976. They are best known for the international hit single All The Young Dudes, written by David Bowie and featured in films such as Clueless and Juno. The band was named after a novel by Willard Manus. The book was about a circus clown named Norman Mott.

The band was named after a novel by Willard Manus. The book was about a circus clown named Norman Mott.

Mott the Hoople formed when Silence, a not-too-successful group from the Welsh borders, was joined by session pianist and rock and roll hopeful Ian Hunter along with Mick Ralphs, Verden Allen, Pete Overend Watts and Dale Griffin . They developed from Dylan obsessives to their own character over the course of four albums for Island. They were a very popular live act but only achieved brief commercial success. In 1971 the band was close to splitting up but continued to record track All The Young Dudes, a song written for them by up and coming pop star and fan David Bowie. Three more albums and several pop hits later the band fell apart when Ian Hunter left in 1974. The remaining members created Mott which released two albums before disbanding in 1976. Original guitarist Ralphs had greater success as member of Bad Company.

All The Way From Stockholm To Philadelphia – Live 71/72 CD2

All The Way From Stockholm To Philadelphia – Live 71/72 CD1