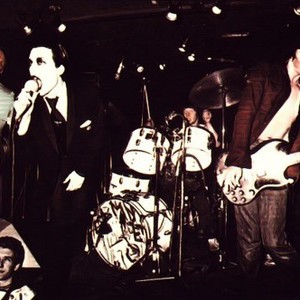 The Damned are a punk rock group originally from Croydon, England, a suburb of London, who were formed in 1976. Despite being one of the definitive early punk bands they were also one of the most ambitious; with their later albums moving away from the breakneck garage sound of their debut and taking in elements from goth and psychedelia to prog and metal. They are notable for being the first of the British punk bands to release a single, put out an album, and tour the United States.

They are notable for being the first of the British punk bands to release a single, put out an album, and tour the United States. Their debut album, Damned Damned Damned, was released six months before The Sex Pistols' debut, Never Mind The Bollocks.

The Damned have dissolved and reformed many times, with singer Dave Vanian remaining the sole constant. They have incorporated many styles in their music, most notably garage rock, psychedelic music, the British theatrical rock of Screaming Lord Sutch and The Sensational Alex Harvey Band, and New Romantic.

In addition to serving as inspiration for many of the young bands who created hardcore punk in the US, The Damned are also generally regarded as one of the founders of goth music.

Original guitarist brian james (Brian Robertson) was a member of the early punk band London SS, a unit that never played live, but whose members later found fame in bands including The Clash and Generation X. Rat Scabies was also tried as the drummer for London SS, but was rejected.

Maintaining the goth connection, between 1996 and 2004 the bass guitarist of the Damned was one-time The Sisters of Mercy / The Sisterhood / Gun Club member Patricia Morrison. Morrison married Dave Vanian in 1996 but left the band after the birth of their daughter Emily. She originally joined the band after bassist Paul Grey was injured during a concert.

As Naz Nomad and the Nightmares

Black Is The Night (The Definitive Anthology) CD2

Black Is The Night (The Definitive Anthology) CD1

Not Of This Earth