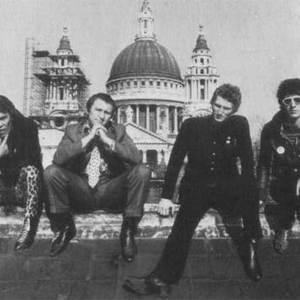 The Vibrators are a British punk rock band that formed in 1976. The Vibrators were founded by Ian 'Knox' Carnochan, bassist Pat Collier, guitarist John Ellis, and drummer John 'Eddie' Edwards. They first came to public notice at the 100 Club when they backed Chris Spedding in 1976. On Spedding's recommendation, Mickie Most signed them to his label RAK Records. Most produced their first single, "We Vibrate". The band also backed Spedding on his single, "Pogo Dancing".

The Vibrators recorded sessions at for John Peel at BBC Radio 1 in October 1976, June 1977, and February 1978. They were one of the pioneering punk bands that played at London's Roxy Club. They headlined in January 1977, supported by The Drones, and in February they played twice at the venue. In March 1977 the band supported Iggy Pop on his British tour. Later that year they backed ex-Mott the Hoople frontman Ian Hunter.
The band signed to Epic Records in early 1977. Their debut album, Pure Mania was co-produced with Robin Mayhew, the sound engineer for David Bowie's Ziggy Stardust live shows, and reached the Top 50 of the UK Albums Chart. The album is well regarded by some music critics and, 17 years after its release The Guinness Encyclopedia of Popular Music named Pure Mania one of the 50 best punk albums of all time.
Their follow-up album, V2, narrowly missed the UK Top 30. The only single to be taken from that album, "Automatic Lover", was the only Vibrators' single to reach the UK Top 40 where it reached #35. It earned the band a TV appearance on the prime-time TV show Top of the Pops. The Vibrators' final single on Epic, "Judy Says (Knock You In The Head)", was released in June 1978. It reached #70 in the UK singles chart. Years later it was included in Mojo magazine's list of the best punk rock singles of all time.
A lack of further chart activity, and with only one UK Top 40 single to their credit, sees the Vibrators join the list of one-hit wonders; a list that includes other UK punk and new wave acts such as The Banned, John Cooper Clarke, The Flying Lizards, Jilted John, 999, the Radio Stars, and the Rich Kids.
During the 1980s, John Ellis recorded and toured frequently with Peter Hammill, and subsequently The Stranglers, eventually joining the latter full-time in the 1990s. Pat Collier went on to work closely with The Soft Boys, producing their seminal album, Underwater Moonlight, and Robyn Hitchcock, producing and mixing some of his solo albums (to which Knox also sometimes contributed). Despite numerous line-up changes, The Vibrators are still touring to this date as a three-piece, "Knox" and "Eddie" being the only original members.

Punk Mania Back To The Roots