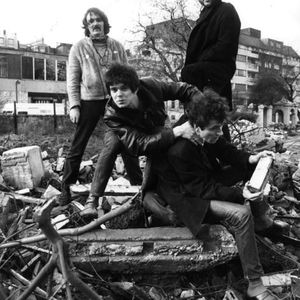 The Stranglers are a rock music group, formed on September 11, 1974 in Guildford, Surrey, England, United Kingdom. They were originally called The Guildford Stranglers and operated from an off-licence in the town. They also based themselves in the nearby village of Chiddingfold for a while. Original personnel were singer/guitarist Hugh Cornwell (from Kentish Town, London), keyboardist/guitarist Hans W&auml;rmling (from Sweden, replaced within two years by Brighton-born keyboardist Dave Greenfield), London-born bass guitarist Jean-Jacques Burnel and drummer Jet Black (real name Brian Duffy)...

They began as a sinister sounding, hard-edged pub rock group, but eventually branched out to explore other styles of music. The Stranglers were, beginning in 1976, tangentially associated with punk rock, due in part to their opening for The Ramones' first British tour. The Stranglers were also associated with new wave music as well as gothic rock, but their idiosyncratic approach never fit completely within a musical genre.

In August 1990, founding member Cornwell left the band to pursue a solo career. In his autobiography, Cornwell states that he felt the band was a spent force creatively, and cited various examples of his increasingly acrimonious relationship with his fellow band-members, particularly Burnel. The remaining members recruited two replacements, including John Ellis, who had opened for the band in the 1970s as a member of The Vibrators, and singer Paul Roberts.

Interest in The Stranglers resurfaced when, in 2001, singer Tori Amos covered their song "Strange Little Girl" and titled the album it was featured on Strange Little Girls. "Golden Brown" was also used in the hit film Snatch by film director Guy Ritchie and extensively in the Australian film He Died With A Felafel In His Hand. Their hit "No More Heroes" was covered by Violent Femmes and used for the film Mystery Men. "Peaches", finally, also appears prominently in another British movie, Sexy Beast by director Jonathan Glazer.

The Stranglers had a critical and popular renaissance in 2004 (together with their first top 40 hit for 14 years - "Big Thing Coming") with the acclaimed Norfolk Coast album and a subsequent sell-out tour. The follow-up album, Suite XVI, was released in September 2006 (the title is a pun on "Sweet 16" and also a reference to the fact that it is the band's 16th studio album).

During the recording of Suite XVI Paul Roberts left the band to pursue his solocareer. Guitarist Baz Warne, who replaced John Ellis in 2000, became the main vocalist.