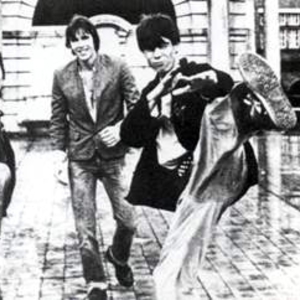 Sham 69 formed in Hersham, Surrey in 1976 (the 12 November issue of NME notes they were rehearsing at this time, although only Jimmy Pursey would remain from this early line-up 12 months later). Sham 69 lacked the art school background of many British punk bands of the time, and brought in football chant back-up vocals and a sort of inarticulate political populism. The band had a large skinhead following (left wing, right wing and non-political), which helped set the tone for the Oi! movement.

Their concerts were notoriously plagued by violence, and the band ceased live performances after one of their gigs at Middlesex Polytechnic in 1978 was broken up by National Front skinheads fighting and rushing the stage.

Sham 69 released their first single, "Ulster", on Step Forward Records in August 1977, and its success in the independent charts prompted Polydor to sign the band. Their major label debut was "Borstal Breakout" in January 1978, followed by UK singles chart success with "Angels With Dirty Faces" (reaching number 19 in May 1978), "If The Kids Are United" (number 9 in July 1978), and "Hurry Up Harry" (number 10 in October 1978). The latter came from their second LP and first full studio album, That's Life.

They then started to move away from punk rock into a sound heavily influenced by classic British hard rock bands such as Mott The Hoople, The Who and The Faces, evidenced on their third album, The Adventures of the Hersham Boys. Sham 69 broke up after their fourth album. Pursey moved in a heavy metal direction after working with the remaining members of the Sex Pistols for a short time, under the name Sham Pistols. Dave Treganna joined the pioneering 1980s glam-punk-Gothic band, The Lords of the New Church, with Stiv Bators of The Dead Boys and Brian James of The Damned.

Pursey resurrected Sham 69 in the 1990s with a different line-up, but without major success. "If The Kids Are United" was used in a McDonald's advertising campaign, long after the rights to their songs had been sold. Pursey is a vegetarian, and appeared in the UK media condemning the use of one of his songs by what - he saw - as a multi-national animal and human abuser. The band gained further media attention when "If The Kids Are United" was played during UK Prime Minister Tony Blair's entrance at the 2005 Labour Party Conference. As a result of this, they were invited onto BBC TV's current affairs programme, Newsnight to sing a version of the song. Altered lyrics were sung, including "Mr. Blair / We know you care / So bring them home / Don't leave them there", referring to the troops remaining in Iraq after the the 2003 invasion.

In 2006, Virgin Radio listeners voted overwhelmingly for Jimmy Pursey to record a song to support England in the FIFA World Cup.[1] The song was based on the Sham 69 hit, "Hurry Up Harry", and instead of the lyric being, "We're going down the pub", it was changed to, "We're going to win the cup!" The resulting single, "Hurry Up England" reached number 10 in the UK Top 40, becoming the band's first such hit for over 26 years.

In 2006 Jimmy Pursey left Sham 69, leaving guitarist Dave Parsons to carry on with a new singer. Sham 69 continues to tour in this new line up.
Pursey has formed a new band called Day 21 with former Sham bassist Mat Sargent.

The Best Of - Cockney Kids Are Innocent