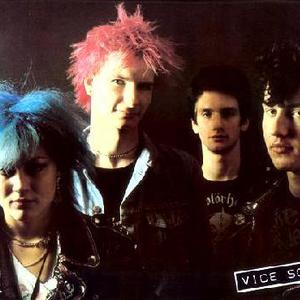 Vice Squad are a punk rock band formed in Bristol, England. The lead vocalist Beki Bondage has been with the band in the original line-up and when the band reformed in 1998. Beki has continued to perform and record new songs including festival appearances at Rebellion in Blackpool UK, Punk And Disorderly Germany and Pod Parou Czech Republic. She is often cited as being the first punk pin-up featuring on the front cover of a number of influential music tabloids such as Melody Maker, NME, and Smash Hits.

Free tracks can be downloaded at their official digital download site, http://vicesquad.bandcamp.com/.

2012 - New album PUNK ROCK RADIO is released to great enthusiasm by fans and media. VICE SQUAD are booked to play Vive Le Rock Festival, Punk & Disorderly Festival, Punk By The Sea Festival and Rebellion Festival. The band are scheduled to play USA and Europe with possible dates in Scandinavia and China. UK dates are ongoing which finds the band tirelessly spreading their Punk Rock Message to the growing army of Vice Squaddies.

2011 - VICE SQUAD play two very successful shows at the prestigious REBELLION FESTIVAL. Taking second headline on Friday's Acoustic stage the band donned spectacles and flat caps and tore through acoustic versions of new and classic tunes under the moniker THE DIRTY FOLKERS.
Ending on the popular 'Last Rockers' and unlikely cover of Motorhead's 'Ace Of Spades'. This Thrash, Rockabilly, Skiffle tinged acoustic set encouraged many people refer to Vice Squads tongue-in-cheek approach as the highlight of their weekend !

The following day VICE SQUAD packed the Olympia Stage and played a storming electric set to over 1500 people. A week later Beki and the band were 'special guests' at the Endorse It festival, where the band played alongside New Model Army. A show with legendary MISFITS USA is booked for November at Ratrock festival in Belgium.
And, finally...after much hard work and inspiration Vice Squad finish the album PUNK ROCK RADIO which includes songs, 'Punk Is The Blues' 'Stuck In Reverse', title track 'Punk Rock Radio' and the hilarious 'Him Indoors' ( first showcased as The Dirty Folkers at Blackpool Rebellion). Many more UK club dates and the new release scheduled for October sees Beki and the boys achieve another relentless and encouraging year in Punk Rock.

2010 - VICE SQUAD begin work on the follow up to 'London Underground' and gig continuously on the UK club circuit throughout the year, plus touring Italy and festival shows at Pod Parou in Czech Republic, The Endorse It Festival, The Willowman Festival, packed out shows at Rebellion and Durham Punk Festival plus the headline slot at the Viva La Pola Summer Revolution Rock Festival in Pula.

The Very Best Of Vice Squad