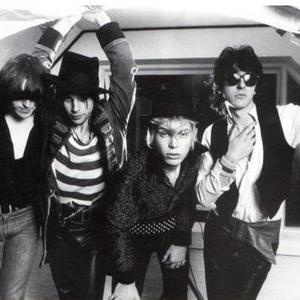 The core members of Generation X were vocalist Billy Idol (who has since maintained a remarkable 25+ year solo career) and bassist Tony James (later of Sigue Sigue Sputnik and for a spell Sisters of Mercy and now with Carbon/Silicon). Generation X was formed in 1976 after guitarist Billy Idol (aka William Broad) and bassist Tony James decided to go out on their own, leaving Gene October, the leader of their then band Chelsea.

In December of 76, they played the first punk gig at mecca club The Roxy in London's Covent Garden neighborhood with friends from "the Bromley contingent" Siouxsie & The Banshees, a band featuring a young Sid Vicious. The blatantly image conscious group soon secured management, fired their first drummer, and auditioned over 50 drummers before settling on Mark Laff of Subway Sect. They were photogenic and signed a worldwide long term deal to Chrysalis (also home of Blondie) and had popsmith Phil Wainman, producer of The Bay City Rollers and Sweet mix their debut album. In September 1977 they became the first punk group to "sell out" and lip synch their debut single Your Generation on TV's Tops of The Pops, and also that month performed on Marc Bolan's TV show just days before the T-Rex frontman's death. Generation X also appeared in films like DOA and in Don Letts' Punk Movie.

In October of 1978, recordings for a second Generation X album produced by Ian Hunter of Mott the Hoople followed, the resulting Valley Of The Dolls hitting the streets in 1979. Guitarist Bob Dagwood Anderson eventually quit the lineup after completing a Japanese tour and the recordings for a third album in 1979.(The final Derwood lineup LP actually doesn't resurface for almost 20 years until 1998, and was finally released on an indie against Idol's wishes as Sweet Revenge).

With renewed spirit and producer Keith Forsey at the helm, Gen X would go on to release one more LP Kiss Me Deadly in 1981. After neither the album nor the singles Dancing With Myself and Kiss Me Deadly took the charts, the band broke up. Idol joined up with NYC based Kiss manager Bill Aucion, re-releasing "Dancing with Myself" and the rest, as they say, is history.

A one off Generation X reunion occured in 1993 at London's Astoria.

Valley Of The Dolls