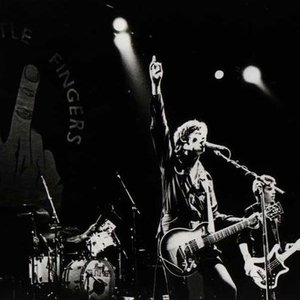 Stiff Little Fingers are a punk band from Belfast, Northern Ireland, formed in 1977. They started out as a schoolboy band called Highway Star (named after the Deep Purple song), doing rock covers, until they discovered punk. In 1983 they split up after six years and four albums, although they reformed four years later, in 1987. Despite major personnel changes, they are still touring and recording as of 2011.

Jake Burns, their lead singer, is the only member to have been with the band during all its incarnations, although in March 2006, original bass guitarist Ali McMordie rejoined them following the departure of The Jam bass player Bruce Foxton after fifteen years.

Prior to becoming Stiff Little Fingers, Jake Burns, vocals and guitar, Henry Cluney, guitar, Gordon Blair, bass, and Brian Faloon, drums, were playing in a rock music cover band, Highway Star, in Belfast. Upon the departure of Gordon Blair (who went on to play with another Belfast group, Rudi), Ali McMordie took over on bass. Cluney had by this time discovered punk, and introduced the rest of the band to it. They decided that Highway Star wasn't a punk enough name, and after a brief flirtation with the name "The Fast", decided to call themselves Stiff Little Fingers, after the Vibrators song of the same name.

It was while they were doing a gig at the Glenmachan Hotel that they met up with Gordon Ogilvie, who was a Marxist journalist with the Daily Express newspaper, invited along for the evening by Colin McClelland, another journalist, with whom Jake had been corresponding.

Ogilvie suggested they play material based upon their experience of the Troubles. McClelland arranged to get the band some recording time at a local radio station, and in the studio normally used to record jingles, they recorded "Suspect Device". The single was packaged in the form of a cassette, with a cover depicting a cassette bomb, apparently causing great hilarity in the group, when one record company phoned them and asked for another copy, as they'd thrown the first one in a bucket of water for fear that it was a real bomb.

A copy of the single was sent to John Peel. He played it repeatedly leading to a distribution deal through Rough Trade. The single was released on the band's own Rigid Digits label and sold over 30,000 copies. Peel would later do the same with the first single by another famous Northern Irish band, The Undertones. There were a number of well-publicised arguments between the two bands; the Undertones accused Stiff Little Fingers of sensationalising the Northern Ireland conflict, while they retorted that The Undertones ignored it.

The lyrics of many Stiff Little Fingers' songs concerning the troubles are extremely critical of the paramilitary organisations and governments involved, showing them to be exploititative of ordinary people (particularly the young) and all as bad as each other. Their second single, "Alternative Ulster", was originally intended to be given away free with the fanzine of the same name.

In the second half of 1978, they toured with the Tom Robinson Band, and in 1979, they released their first album, Inflammable Material. The band agreed a contract with Island Records, but it fell through, leaving the band to release the album on their own label. Despite the album's independent release, it reached number 14 in the UK Albums Chart and reached Silver status, selling over 50,000 copies. Inflammable Material was the first album distributed Rough Trade records, and the first independent album to chart in the UK. This inspired their move to London, which led to the departure of Brian Faloon and Colin McClelland (who along with Gordon Ogilvie had been joint manager of the band up until that point).

Jim Reilly became their drummer in time for the "Gotta Gettaway" single, and played in the Rock Against Racism tour.

Nobody's Heroes and Go for It

In mid-1979, Stiff Little Fingers signed their Rigid Digits label to Chrysalis Records, and in 1980 released their second album, Nobody's Heroes. 1981's Go for It followed. Soon after the Go for It tour, Jim Reilly left the band. His place was taken by Brian 'Dolphin' Taylor, who Jake remembered from Taylor's days with the Tom Robinson Band.

In 1982 came a 4 song EP called ?1.10 or Less and then their fourth studio album, Now Then... (although their fifth album, as they had released a live LP, Hanx, between Nobody's Heroes and Go for It). By this time they had diversified musically, and Now Then had an almost pop feel about it in places. This led some of their more hardcore fans to feel alienated, and in the face of low sales and concert attendances, they broke up in 1983, when Burns said: "Our last LP Now Then was to my mind the best album we have made. But it is also unfortunately the best I think we will ever make. So I have decided to call it a day." The band later revealed the original split had been somewhat acrimonious, with bandmembers apparently having fistfights rather than talking through their differences.

They reformed in 1987; according to Burns, because they were "skint and wanted to make a bit of cash to get back to Ireland for Christmas". They released some live albums and did short tours towards the end of the 1980s, and by 1990 were thinking of reforming permanently.

Ali McMordie decided he could not commit the time to tour full-time or record, and so left, being replaced by Bruce Foxton (previously bass guitarist in The Jam) in time to record 1991's Flags and Emblems. In Britain, the single from this album, "Beirut Moon", was withdrawn from sale on the first day of release, allegedly because it criticised the government for not acting to free hostage John McCarthy, who had been held in the Lebanon.

In 1993 Burns made what he described as one of the hardest decisions of his life and asked Henry Cluney to leave the band, and the trio of Jake Burns, Bruce Foxton and Dolphin Taylor continued for the next four years, joined on live shows by either Dave Sharp or Ian McCallum.

In 1994 they released Get a Life in the UK, releasing it in the U.S. in 1996. By the end of 1996 Taylor left due to family commitments. Burns called in Steve Grantley who had played drums for Jake Burns and the Big Wheel in the late 1980s.

The trio of Burns, Foxton and Grantley recorded 1997's Tinderbox album, with help from Ian McCallum who joined as a full time member for 1999's and best of all...Hope Street . This same line-up recorded 2003's Guitar and Drum.

On 18 January 2006, the following announcement appeared on the SLF Website. Bruce Foxton has announced that he is to leave Stiff Little Fingers with immediate effect. After 15 years of writing, recording and touring with SLF Bruce says it is time to move on and concentrate on other projects. "The situation is amicable" says Foxton. "I have enjoyed my time with Jake, Ian and Steve and will miss them. Naturally I wish them all continued success and hope to catch up with the boys during their spring tour."

Obviously, we as well wish Bruce every success in everything he goes on to do in the future. He has been a fantastic asset to the band and we'll miss him as well.

On 23 January 2006, it was announced that original bass guitarist Ali McMordie was to rejoin the band for the duration of their upcoming March tour. The tour was a success, with many fans writing into SLF's message board saying how much they enjoyed it, and how fired up the band seemed to be. After much discussion regarding the status of McMordie within the band after the tour, on 21 April 2006, Burns posted the following on the message board.

"For the time being Mr. McMordie is happy to continue as long as his busy schedule allows. It may be that occasionally we have to bring on a "substitute", if he is up to his eyes and we need to do something, but hopefully we can avoid that.

On 9 March 2007, Jake Burns announced that Stiff Little Fingers would be recording a new album which would hopefully be completed by the end of 2007. They have previewed a track from the new album, "Liars Club", at live concerts. The track is named after a bar Jake drove past on his way home whilst listening to a press report about Tony Blair, George W. Bush and the Iraq War. As of February 2009, the new album is still unreleased. This is mainly due to the fact that Burns had more or less completed writing, when he decided on a change of direction, and scrapped most of the songs.

Assume Nothing, Question Everything CD2

Assume Nothing, Question Everything CD1