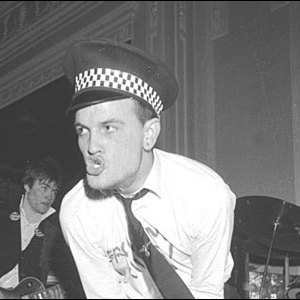 Angelic Upstarts are an English punk rock band formed in South Shields in 1977. They are one of most prominent Oi! bands, and espouse a socialist and working class philosophy. Angelic Upstarts have been associated with anti-fascist skinhead subculture. More than two decades after its release, their debut single, "The Murder Of Liddle Towers", was included in Mojo magazine's list of the best punk rock singles of all time.

The original line up for the band was Mensi (vocals), Mond (guitar), Steve Forsten (bass) and Decca Wade (drums). The band have reformed and split a few times over the years and some of the ex members include bass players, Ronnie Wooden, Glyn Warren, Tony Feedback, Ronnie Rocker and Max Splodge who also had a stint playing drums. Other drummers have included Sticks (who later joined The Cockney Rejects), Paul Thompson (ex Roxy Music) and Chris White. Decca Wade rejoined the band for a few years before leaving again.

Brian Hayes originally joined the band as second guitarist until Mond left leaving Brian as the only guitarist. The line up for the band is as follows

The band are still playing throughout Europe.

Live From The Justice League