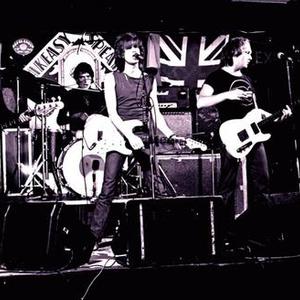 The Only Ones are a power pop band which formed in 1976 in London, England. They consist of Peter Perrett (vocals, guitar), John Perry (guitar), Alan Mair (bass) and Mike Kellie (drums). The band is best known for their 1978 single "Another Girl, Another Planet" which was called "arguably the greatest rock single ever recorded" by Allmusic contributor Andy Claps. The band broke up in 1982 and reunited in 2007. They were associated with the punk rock 70's punk scene, yet straddled the musical territory in between punk, power pop and hard rock, with noticeable influences from psychedelia.

They were associated with the punk rock 70's punk scene, yet straddled the musical territory in between punk, power pop and hard rock, with noticeable influences from psychedelia.

The Only Ones were originally formed in August 1976 by Peter Perrett. Their first single "Lovers Of Today" was released through an independent record label (Vengeance) and was immediately made 'Record of The Week' by 3 of the 4 main music papers. A year later they signed to CBS. Their next single "Another Girl, Another Planet" was a very popular and influential song, and unquestionably the band's best known work. An self-titled album was released in 1978 and was well received by reviewers and fans. Other albums were Even Serpents Shine (1979) and Baby's Got A Gun (1980). In 1982 the band officially disbanded.

In subsequent years the band gained a fierce cult following and posthumously released records - live performances, BBC TV and radio shows, and compilations - now outnumber their official albums. Unusually, the Only Ones discs were never deleted from the CBS catalog, and remain in print today.

In between this period Peter Perett as the ONE released an Ep, Solo studio album on Demon called "Woke up Sticky" and a live cd combining Only Ones and the One tracks. Alan Mairs old band the Beatstalkers -touted as the Scottish Beatles had a CD released some tracks were penned by a young DAVID BOWIE.

In 2007, the band's original lineup reunited for a tour and over 30 years after their formation - made their live television debut performing "Another Girl Another Planet" and a new song called "Black Operations" on the first live episode of Later...with Jools Holland in April 2008.

Baby's Got A Gun

Why Dont You Kill Your Self CD2

Why Dont You Kill Your Self CD1

Alone In The Night