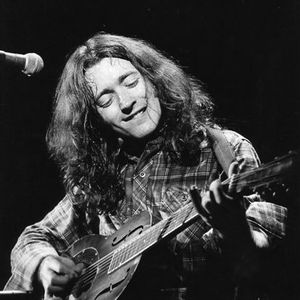 There are two artists named Rory Gallagher: (1) Rory Gallagher (1948-1995) was a legendary Irish blues/rock guitarist, born in Ballyshannon, County Donegal, and raised in County Cork. He is regularly credited as one of the most influential Irish rock and blues musicians of all time. Before finding solo fame he was a member of blues-rock band Taste. In 1972 he was voted Melody Maker's Top Musician of the Year, dethroning Eric Clapton.

(1) Rory Gallagher (1948-1995) was a legendary Irish blues/rock guitarist, born in Ballyshannon, County Donegal, and raised in County Cork. He is regularly credited as one of the most influential Irish rock and blues musicians of all time.
Before finding solo fame he was a member of blues-rock band Taste.

In 1972 he was voted Melody Maker's Top Musician of the Year, dethroning Eric Clapton.

Rory died of complications following a liver transplant in 1995. As the funeral cortege moved through the streets of Cork, his life and music was celebrated by the city's citizens. He is buried in St. Oliver's Cemetery just outside the city.

Generally regarded as one of the top ten guitarists ever, many of today's top musicians, including The Edge from U2, Slash of Guns N' Roses, Johnny Marr of The Smiths and Brian May of Queen cite Rory as an inspiration in their formative musical years. It is also well documented that The Rolling Stones auditioned Rory for the band as their permanent guitarist in the '70s but he refused on the basis that it was against all he believed in terms of his own name and style. Though Rory Gallagher never released a single, Rory Gallagher's albums have sold in excess of 30 million copies worldwide.

A square in Cork City was named after him in 1997 and signature edition of his Fender Stratocaster guitar was released as well.

In 2002 he appeared on a Republic of Ireland postage stamp.

There is a Rory Gallagher Corner at Meeting House Square in Temple Bar, Dublin.
On the 19th May 2006, a life-size bronze statue in the shape of his Stratocaster has been installed at this very corner. Some of those who attended the unveiling include The Edge of U2 and the Lord Mayor of Dublin.

(2) Rory Gallagher is a 21 year old Cardiff based Trance Producer/DJ hailing from London, U.K. He is also known as Rozza.
Whilst living in Ireland, Rory found himself instantly hooked to trance music after hearing Paul van Dyk's 'For an Angel' and the classic Ireland 'Euphoria' album back in 2003. After many years of absorbing to electronic music and developing a fine taste for it, he decided to try his hand at creating the music. In 2005, whilst learning the basics of production, Rozza decided that trance music was what he wanted to do and was constantly in his home studio, experimenting with fresh sounds and ideas.
Looking at the bigger picture, he decided to focus on production & sound engineering and as a result is now studying for a Music Technology degree.

In early 2007, after catching the attention of Adam White, Rozza was signed up to Emalodic (Adam White's label) and saw his debut single released. His first record, titled 'Discover', gained excellent reviews in the dance press and support from the biggest DJs the world-over.
Since then Rozza has had a number of successful releases on Alter Ego, Deepblue, Infrasonic & Emalodic amongst others, which have all had big support from key players in the scene.
Rozza has also been working with the likes of Adam White, which led to the massive ?Love Angles' and was heavily supported on Radio 1 and by Armin Van Burren. Recently he has worked with Danish producer Daniel Kandi on a remix of ?The Path'.

On the DJ circuit Rozza has held a residency in Newport Wales, and has played at various nights in Thailand, Europe and around the UK.