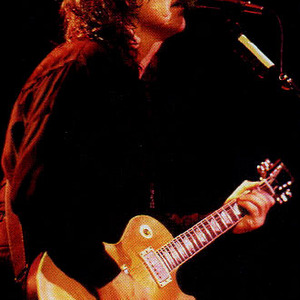 Gary Moore (born April 4, 1952 as Robert William Gary Moore in Belfast, Northern Ireland, United Kingdom; died February 6, 2011 in Malaga, Spain) is acknowledged as one of the finest guitarists to have originated in Ireland. In a career dating back to the 1960s he has played with bands including Thin Lizzy, Colosseum II, Greg Lake and Skid Row as well as having a successful solo career. Moore started performing from a young age and got his first good guitar at the age of 14.

Moore started performing from a young age and got his first good guitar at the age of 14. In a career lasting over 30 years he has demonstrated that he is a fine musician, and his unique style of playing has adapted to very different music genres.
He is considered one of the best guitarists to date.

For blues fans, Moore's best recorded, live performance on video is "LIVE BLUES" recorded in a small night club in London and was released in 1992 on VHS. It is now available on DVD as well. "LIVE BLUES" also features two songs with B.B. King appearing on stage with Moore. "The Thrill Is Gone" on this recording is probably the best version of this, complete with More's Midnight Horns, female backup singers and dueling guitars. Many of Moore's standard songs are on this 90 minute show and were mixed better than most of the studio versions of the same tunes for a very rich and full sound. Even Moore's voice sounds better than it usually does in the studio. Moore does not seem interested in touring the United States.

According to numerous interviews he has given to guitar magazines, he was the protege of British Blues pioneer Peter Green, whom he had always admired ever since the Bluesbreakers days. When Green quit Fleetwood Mac and the entire music scene, he sold his famous nasal-sounding 1959 Gibson Les Paul to Moore for the same price that Moore had managed to sell his then guitar (a Gibson SG) for. The nasal sound of the neck pickup on Green's guitar was not, as used to be believed, the result of the pickup having been turned backwards, but instead its two coils had been - perhaps accidentally - reconnected in parallel and out of phase, as per the "in between" positions of a Fender Stratocaster. Moore has used this guitar in the recordings of some songs of his albums Still Got The Blues, After Hours and Blues For Greeny. Green and Moore also reportedly had a disagreement regarding what guitar the former was playing in the song "Albatross". Moore insists it was the Les Paul, because the guitar tone was particularly warm and rich in the bass, while Peter Green maintains he was using a Strat, as the vibrato in that song was not finger vibrato, but subtle tremolo arm vibrato. Up to this day, Green and Moore remain good friends.

Over the years Gary has used numerous guitars. These include: Peter Green's 1959 Gibson Les Paul, Peter Green's 1961 Fender Stratocaster and 1950s Gibson Les Paul Junior. He has also used guitars from Charvel, Ibanez, Hamer, Jackson and Heritage. Amplification has generally come form Marshall, though Soldanos and Fender have also been used, as well as transistor-driven Dean Markley units (especially in the studio). He also has used numerous effects over the years. these include; Delay units such as the Echoplex, Overdrive/Booster units such as the Boss DS-1, Ibanez Tubescreamer variants, Marshall Bluesbreaker and Guv'nor pedals as well as Wah-Wah pedals such as the Vox Wah. He appears nowadays to favour Gibson and Fender Guitars through Marshall amps with any of the above Overdrive pedals and Wah pedals to make his sound.

In 1973 he released his first solo album as the Gary Moore Band. In 1979 his solo career started again with help from Phil Lynott, the combination of Gary's blues based guitar and Phil's voice produced "Parisenne Walkways" which reached the UK Top Ten in April 1979 and the no.2 album 'Black Rose'. After a series of powerful rock records Gary returned to blues music with Still Got the Blues, with contributions from B. B. King, Albert King and Albert Collins the album was well received by fans and a huge success. Gary stayed with the blues format until 1997 when he decided to experiment with modern dance beats in Dark Days In Paradise; this left many fans as well as the music press confused. Back to the Blues saw Gary return to the tried and tested blues format.

Later on in 2006, Gary will support BB King on his 'Farewell UK Tour'. It is not known if this will lead to a tour of the United States with BB King.

He is also to release a new studio album entitled 'Old New Ballads Blues'. It will be the follow up of 2004's 'Power of the Blues' and it will feature new material as well as new versions of fan favourites 'Midnight Blues' and 'All your Love'

Gary Moore has also sold his Les Paul that was given to him by Peter Green to a private owner.

On February 6th 2011, he died from a heart attack in his sleep while on holiday in Spain.

* The Lord Of The Strings - World Wide Gary Moore Fansite: http://www.garymoore.hu/eng.htm Thanks for the music.

How Blue Can You Get