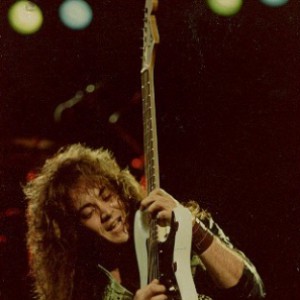 Jakey Lou Williams was born February 15, 1957 and raised in West Virginia, USA. His mother was Japanese, and his father was an American serving in the Navy. When the Navy relocated Jake's father, the entire family would pick up and move at a moments notice. Finally, however, the Williams family moved to San Diego, California, where they stayed for a long while. Jake began diving into the local California culture, and he took a liking to skateboarding. His mother had forced him into classical piano lessons, but soon he was interested in the guitar.

His sister, who had a tremendous influence on Jake as a child, let him listen to some of her records, including Jimi Hendrix, Led Zeppelin, and Black Sabbath. These bands led to Jake's intense interest in the electric guitar and Rock and Roll music. Sadly, Jake's sister passed away in a motorcycle accident.

During high school, Jake would walk around campus with his acoustic guitar strapped to his back. He never joined a clique or group, but he had the reputation as the cool guitar dude with long hair. He formed a band called Teaser, and they played one school dance before Lee was kicked out of school for changing the grades on his report cards. Teaser continued, however, and Jake played many clubs in the San Diego area. They developed a huge following, and packed clubs and parties where they frequented. He caught the eye of guitarist and good friend Warren DeMartini, and soon DeMartini was asking Jake for lessons. He also caught the eye of Stephen Pearcy of a San Diego band called Mickey Ratt. Pearcy asked Lee to join his band as lead guitarist, and Jake accepted. They changed the band's name to Ratt, moved to L.A., and began playing clubs. Soon, their following was huge, too, and they began gigging in popular clubs like the Whiskey and the Troubadour. Jake left Ratt for greener pastures, however, and was replaced by DeMartini, on Jake's recommendation.

Jake played a few gigs as lead guitarist of Rough Cutt, and was discovered by Ronnie James Dio. Dio expressed an interest in working with Jake, but they only wrote a few tunes together before Lee left to seek further musical inspiration. Around this time, Ozzy Osbourne had began to contact him, inviting him to audition for the lead guitarist spot in his band. Ozzy had just lost Randy Rhoads, who had been a tremendous force in the metal scene. Jake knew that the shoes were huge, but he thought he could fill them. He auditioned amongst 500 other guitarists from around the world, and Ozzy at length chose Jake over all of them. Jake flew to England for rehearsal, and then went on tour with the legendary madman Ozzy Osbourne.

For four years, Jake toured with Ozzy. They put out "Bark at the Moon", which eventually went multi-platinum, and quickly quieted critics who said Rhoads could never be replaced. The "Ultimate Sin" album followed, and was another grand success for Ozzy Osbourne. Ozzy, however, was in the midst of his drug-and-alcohol days, and fired Jake in the middle of one of his rages. Contrary to common belief, however, Ozzy and Jake remain good friends to this day, and Ozzy has recently talked to Jake about a possible reunion, although Jake has repeatedly turned him down.

After the Ozzy Osbourne madness, Jake took a break. He wanted to spend more time with his daughter and wife. As soon as word spread that Jake was back on the market as a guitar player, however, the phone calls started coming in. Nothing interested Jake, however, until he received a phone call from ex-Black Sabbath lead singer Ray Gillen. Gillen was hoping to form a blues-based metal band with Lee, and Lee responded. Together, they recruited bassist Greg Chaisson and drummer Eric Singer, and formed Badlands.

Badlands put out their first album in 1989, self-titled "Badlands". It was a mix of bluesy metal, powered by hard-driving guitar riffs, and it received critical acclaim. The band toured to support the album, and followed it up with "Voodoo Highway". Voodoo was an even deeper dive into the blues, and again received acclaim from critics. However, due to internal pressures, Ray left Badlands, and the band didn't last very long with his replacement, John West. Unfortunately, Ray Gillen would eventually pass away due to complications caused by the AIDS virus. In the year 2000, however, "Dusk" was released, which was recorded live in earlier sessions with Ray Gillen.

Since Badlands, Jake has been invited to play on several compilation and tribute albums, including tributes to Rush, Jeff Beck, and Van Halen. He also released a solo album called "A Fine Pink Mist". There could be much more in store for this most excellent virtuoso guitarist. Hopefully the world will hear more from Jake E Lee very soon.

Runnin' With The Devil