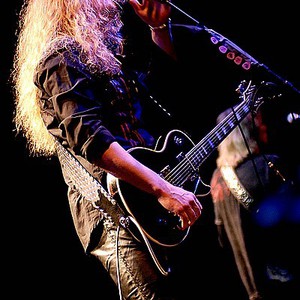 Sykes fell victim to Whitesnake's revolving door; he was fired near the end of the 1987 recording sessions, but managed to record all his parts, save for the solo on "Here I Go Again" which was added later by Adrian Vandenberg.

This was Whitesnake's most successful recording, selling over 20 million copies worldwide. Songs like "Still of the Night", "Is This Love", "Give Me All Your Love", and particularly "Here I Go Again" were all hits, with the album reaching #2 on the Billboard Top 200.

Hoping to capitalize upon the success of 1987, Geffen Records signed Sykes to form a new band. After auditioning several vocalists (including Tony Martin and Ray Gillen), Sykes was encouraged to handle vocal duties himself. With fretless bassist Tony Franklin and drummer Carmine Appice, Blue Murder was formed.

Their self titled debut did moderately well, with "Valley of the Kings" receiving substantial airplay on MTV's Headbanger's Ball, the follow-up Nothing But Trouble received no promotion from Geffen and died quickly. A live recording, Screaming Blue Murder, was to be the band's final release.

Sykes has since recorded several solo albums, including Loveland, 20th Century, and Nuclear Cowboy. His latest album is a new live recording titled Bad Boy Live, which covers a large swath of his career, from the Thin Lizzy days through his most recent solo efforts.

In 1999, John Sykes' solo song "Cautionary Warning" was used in the anime series Black Heaven. The footage accompanying the song was rotoscoped from one of Sykes' concerts, which was a very striking statement for use in previews. Sykes' involvement in the series was the key feature of Pioneer USA's marketing.

In 2006, he got his own signature Gibson Les Paul Custom which was modeled after his favorite guitar, and has used it when touring with Thin Lizzy all around the UK and Ireland.

After over a decade fronting the reformed Thin Lizzy, John announced his departure from the band in June 2009.

Out Of My Tree