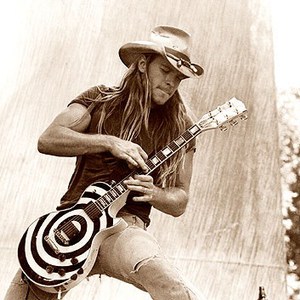 Jeffery Phillip Wiedlandt (Born January 14, 1967 in Bayonne, New Jersey), better known as Zakk Wylde, was the lead guitarist in Ozzy Osbourne's band and has also found success playing lead guitar in his own band, Black Label Society, who have been a part of the Ozzfest tour many times, having guitarist Nick Catanese on the rhythm section. Zakk has been voted "Most Valuable Player" for three successive years in the "Guitar World" (US) magazine polls.

Zakk has been voted "Most Valuable Player" for three successive years in the "Guitar World" (US) magazine polls. In 2005, he was also voted "Best Metal Guitarist", "Number 1 Shredder" and received the "Metal Hammer" (UK magazine) "Riff Lord" and "Golden God" awards.

Wylde has done numerous "guest" appearances on many albums, such as the debut album for Damageplan as guest vocalist, as well as Derek Sherinian's album "Black Utopia" alongside Yngwie Malmsteen, among others.

Zakk's film credits include Rock Star (As "Ghode", guitarist of the ficticious band Steel Dragon) and the concert DVD Boozed, Broozed, and Broken-Boned (Certified Platinum), recorded at Harpo's in Detroit, MI. It was the first time in the concert hall's history that all of the alcohol had been consumed on one night (Zakk's favorite beer is Sierra Nevada Pale Ale). He has also done a comedy skit show alongside Jim Breuer, titled "Crapshoot", which is now available on DVD.

Wylde has also appeared as a guest star on the TV show Aqua Teen Hunger Force. He is a New York Yankees and New York Giants fan. He also performed the National Anthem on the electric guitar during a New York Rangers game in October 2005.

Zakk and his wife, Barbaranne, have 3 children and live outside of Los Angeles. He was a close friend of the deceased Dimebag Darrell since 1993, exchanging guitars in admiration for one another as fellow guitarists. Dimebag had given Zakk one of his custom Dean guitars with the trademark "bulls-eye" design on it shortly before the guitarist's untimely death. Wylde dedicated the song "In This River" to Dimebag, citing that although the song wasn't originally written for him, the lyrics were fitting to the situation. He dedicates each live performance of the song to Dimebag.

Zakk started playing the guitar at the age of 15 and used to work at Silverton Music in Silverton, NJ. He practiced guitar as much as 12 hours per day. Often, he would play the guitar almost non-stop between coming home from school and leaving for school the next morning. He would then sleep through the school day.

Growing up, Zakk played locally with his first band called "Stone Henge" then later with local Jersey band "Zyris". Years later, a virtually unknown 19 year-old Zakk landed the coveted role as lead guitarist and co-writer for Ozzy Osbourne. He sent Ozzy a demo tape in 1987 and was hired to replace the departed Jake E. Lee. Jake replaced the deceased Randy Rhoads, an idol of Zakk's, for whom he even built a shrine.

It is said that Wylde, at the age of 19, was hired after only one audition. Zakk's then-girlfriend (now wife) Barbaranne heard Ozzy was looking for a new guitarist on the Howard Stern radio show and sent him a mix tape. Ozzy dismissed the tape among thousands of others as "just another Randy Rhoads clone". But a couple weeks later, Ozzy's drummer at the time told him he'd found this great guitarist from New Jersey. Zakk recalled how he received a phone call from Sharon (thinking it was one of his friends' mother) telling him there was a ticket for him to fly out and audition for Ozzy. Ozzy soon recognized him from the tape and press kit, and hired him as his new guitarist.

Ozzy had run through many hopefuls following Lee's departure. At his fated audition, Zakk reminisces that he was hired on the spot even before he started playing, when he was still tuning his guitar. He first appeared in No Rest for the Wicked in 1988 with Ozzy Osbourne. In addition to Black Label Society, Zakk has been part of a Southern style blues band called "Pride & Glory" that released one self-titled album before disbanding. He has also released an acoustic solo project entitled "Book of Shadows" that contained a much different style of music than he had been accustomed to producing in the past.
Gibson Les Paul Custom "Bulls-eye" Zakk Wylde Signature Model Guitar
Enlarge
Gibson Les Paul Custom "Bulls-eye" Zakk Wylde Signature Model Guitar

Zakk Wylde's guitar-playing style is usually characterized by his use of pinch harmonics (often confused with artificial harmonics), and his guitar soloing technique is usually characterized by his use of the minor pentatonic scale, playing rapid box-pattern licks using strict alternate-picking, creating a very distinctive, choppy attack, compared to the more fluid playing styles of other rock guitarists. Another notable feature of Zakk's playing is his liberal use of "chicken pickin' ", a technique which is usually associated with country music, and which is (comparatively) rarely seen in heavy metal; a technique he has picked up from watching Albert Lee, one of his influences.

He is known for his use of Gibson Les Paul Custom model guitars with a unique "bulls-eye" graphic on them, a design he used to deliberately differentiate himself visually (despite having a similar hairdo) from Randy Rhoads - who was also frequently identified by his white Les Paul Custom. Interestingly, one of Zakk's favorite stage guitars of late is a replica of Rhoads' Flying V. The "bulls-eye" paint job was originally supposed to look like the spiral from the movie Vertigo, but when it came back incorrect from the luthier, he liked the result and stuck with it.

Zakk's signature Les Pauls include, a red and flame-maple bulls-eye model, a black and antique-white bulls-eye model, an orange "buzz-saw" model, which Zakk got the pattern off a zippo lighter, and a "camo" bulls-eye model with mother of pearl neck inlays and a green camouflage paint scheme. His original bulls-eye Les Paul was bought from a regular store front and is christened "The Grail". It was lost to Zakk for some time when it was stolen while he was coming back from a gig in Texas. Rewards were posted to anyone that had information about the guitar - it holds sentimental value to him since it was a graduation gift from his parents.

Zakk and The Grail were only reunited years later, after a fan bought it at a pawn shop and realized he may very well have the missing guitar after checking the initials "Z.W." on its back and the serial number marked on the headstock. He then contacted Zakk's webmaster to arrange its return.


Gibson has released production models of Zakk's unique guitars, a testament to his commercial success and influence. Ozzy has always left the option open to his musicians to leave if they see greener grass elsewhere, but Zakk had stayed faithfully by the side of the Prince of Darkness ever since his teens. Zakk has also in the past auditioned and was poised to become part of Guns N' Roses but a miscommunication between management led to Zakk never having the opportunity to play with Axl Rose.

Zakk has stated that he has no respect for musicians who release material "not true to themselves". As a consequence, the band Limp Bizkit and their front man, Fred Durst are regularly ridiculed during Black Label Society's live events. Besides Fred Durst, Zakk has ridiculed 90's grunge band Nirvana by calling them 'shitvana' after finding out Dave Grohl helped Ozzy with guitar parts on an album. Wylde also believes that during a time of war, full allegiance to country, government and troops is required. Some believe him to be conservative, but Wylde cited "followers of George Bush" as one of the influences behind the "Mafia" track "Suicide Messiah".

On January 17, 2006, Zakk Wylde was immortalized at the Hollywood Rock Walk of Fame located at 7425 Sunset Blvd, featuring his hand prints and signature, in recognition to his successful career as a musician and contribution to music industry. The event was open to the public and had the presence of many rock celebrities.

Although Ozzy Osbourne has been auditioning new guitarists for future material, he announced Zakk as the official guitarist for his new album as a follow-up to his last studio release, "Down To Earth". Notably, the band performed recently during the latest UK Music Hall of Fame, playing "Crazy Train".

As of 2006, Zakk started the studio recordings for Black Label Society's follow-up to the 2005 release, "Mafia". The new album will be called "Shot To Hell", and will be released on September 19th through Roadrunner records with Michael Beinhorn (Soundgarden, Ozzy Osbourne, Red Hot Chili Peppers) producing. The original release date was July 3rd. Black Label Society will be headlining 2nd stage at this year's Ozzfest wih Zakk playing double duty with Ozzy on certain dates. Ozzy's new album will be out in 2007.

Zakk was good friends with fellow musician Dimebag Darrell and before his death, Dimebag gave him a custom made Dean guitar that was Dimebag's Razorback signature guitar, painted with Zakk's Bullseye graphic.