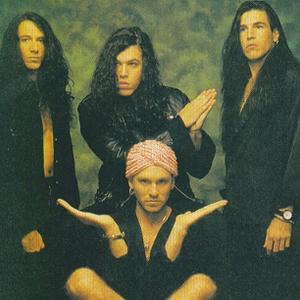 A harmonic hard rock band, Saigon Kick at times crossed over into alternative without alienating their rock fans. The group considered themselves a thinking-man's band with intelligent and thought provoking lyrics. Formed in Miami, Florida by Matt Kramer (vocals), Jason Bieler (guitar), Tom DeFile (bass) and Phil Varone (drums), the band managed to build up a solid following in their native Florida and eventually got signed to Atlantic records.

It took a mere eleven days to record the debut album, and although it got rave reviews from critics, went mostly unnoticed by the record buying public.
The band hit it big with The Lizard and its #12 charting ballad "Love Is On The Way". The success of the ballad was a double-edged sword, it gave the band access to a huge new fan base, but several people grouped the band in with the other one hit wonders of the era. Shortly after the band's success DeFile left the band and was replaced by Chris McLernon. Prior to the recording of Water, Kramer also left the band and Bieler took over on vocals. The album was a commercial disappointment in America, but the band continued to have a loyal following overseas. Two more studio albums were recorded before the band decided to call it a day.
Bieler went on to form Super Transatlantic, and surprisingly the original Saigon Kick minus Bieler rejoined with Jeff Blando on guitar for some live shows. Varone also surfaced as the drummer for Skid Row during their 2003 comeback while Kramer pursues a solo career. The group continues to tour sporadically to this very day.

Moments From The Fringe

Greatest Mrs.: The Best Of

Devil In The Details