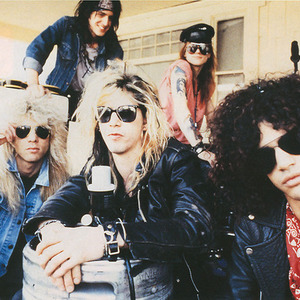 Guns N' Roses is an American hard rock band founded in Los Angeles, California in 1985. The band has released six studio albums: Appetite for Destruction in 1987, G N' R Lies in 1988, Use Your Illusion I and Use Your Illusion II in 1991, "The Spaghetti Incident?" in 1993 and, after 15 years and with frontman Axl Rose being the only member of the original lineup remaining, Chinese Democracy in 2008. They also released an EP titled Live ?!*@ Like a Suicide in 1986.

The band has released six studio albums: Appetite for Destruction in 1987, G N' R Lies in 1988, Use Your Illusion I and Use Your Illusion II in 1991, "The Spaghetti Incident?" in 1993 and, after 15 years and with frontman Axl Rose being the only member of the original lineup remaining, Chinese Democracy in 2008. They also released an EP titled Live ?!*@ Like a Suicide in 1986.

The group was formed in early 1985 by Hollywood Rose members Axl Rose (vocals) and Izzy Stradlin (rhythm guitar) and L.A. Guns members Tracii Guns (lead guitar), Ole Beich (bass) and Rob Gardner (drums). The band created its name by combining two of the members' names. A short time later, Beich was fired and replaced by Duff McKagan, and Guns was replaced by Slash after not showing up to rehearsal. Slash had played with McKagan in Road Crew and with Stradlin during a short stint in Hollywood Rose. On their first tour (from Sacramento, California to Duff's home town of Seattle), Gardner quit and was replaced by Slash's friend, Steven Adler.

Stemming from the LA rock underground, the ugly lyrics matched the sleaze of the music--driven by heavy blues licks--covering misogyny, violence, city life, sex, liquor, and hard drugs. They also, however, had a tendency to show sensitivity and a desire to break free from the city. Subsequent albums revealed influence from bands in the vein of The Rolling Stones and Queen.

Their 1987 breakthrough, Appetite for Destruction, (18-times platinum and the highest-selling debut album of all-time), coupled with the success of the hit single "Sweet Child o' Mine" in 1988, took the world by storm. "Appetite" was full of raunchy hard rock with blistering, anthemic guitar riffs and snarling vocals.

The followup EP, "G N' R Lies", contained four songs from their debut EP, three new acoustic songs, and an acoustic version of "You're Crazy". The album sold well and got into the top 10 alongside Appetite. By the end of the 1980s, they were one of the most popular bands in the world.

steven adler (original drummer) was kicked out of the band due to his drug abuse and replaced by Matt Sorum.

Following the release of G N' R Lies, Use Your Illusion I and Use Your Illusion II made history by making the number 1 and 2 spots on the American Billboard Album chart. The albums were filled with songs that pushed Guns into a different direction, far from the Appetite era. They surprised critics who expected hard rock songs but found more "epic" tracks featuring a wider range of instruments (pianos, brass instruments, various effects, etc). The main response was that instead of releasing two albums that included "filler tracks", they could have released one CD.

The band then started a world tour to support the albums. During this tour, rhythm guitarist Izzy Stradlin quit the band due to differences with Slash, Sorum and McKagan due to his newfound sobriety and Stradlin's anger at Rose's management of the band.

They played 192 shows in the 28-month tour, which set attendance records and concluded with a show in Buenos Aires, Argentina, on July 17, 1993. This show marked the last time original members Slash and McKagan and newcomers Clarke and Sorum would play a live show with Rose.

Axl began work on a new album of original material in 1993. In 1994, Gilby Clarke left the band, and was replaced with Paul Tobias. That same year, the band recorded a cover version of The Rolling Stones' "Sympathy For The Devil" for the movie Interview with the Vampire. According to Slash's 2007 autobiography, the first version of guitar track was rejected by Axl, who wanted Slash to copy Keith Richards' playing on the original. Reluctantly, Slash agreed and recorded another version closer to the original. Slash was further infuriated when he discovered Tobias' guitar copying his own solo note by note layered in the final mix of the song. This would be the last recording by the original version of the band, and five years would go by before any new material came out under the Guns N' Roses name.

Slash drifted in and out of the band for the next couple of years, beginning a side project called Slash's Snakepit. In August 1996, GN'R returned to the studio, even though McKagan and Sorum were simultaneously touring with their side project, Neurotic Outsiders. Eventually, only Slash and Rose were left to continue working. During this period, Slash commented in an interview, "My relationship with Axl right now is sort of at a stand still." Additionally, Axl had approached guitarist Zakk Wylde (Ozzy Osbourne, Black Label Society) about jamming and possibly joining Guns N' Roses.

In 1996 and 1997, Slash, Sorum and McKagan all left the band for good, leaving Rose as the only remaining charter member of the band. The three later formed rock supergroup Velvet Revolver with former Stone Temple Pilots frontman Scott Weiland and guitarist Dave Kushner.

In 1998, a "clean" (i.e., profanity removed) version of Use Your Illusion was released (in the USA only), mainly so the album could be sold in Wal-Mart and K-Mart stores.

Also in 1998, Axl put a new version of the band together and returned to the studio. This version of the band has been touring and recording sporadically ever since. The new band's membership has changed frequently, but its core members have included guitarist Robin Finck, effects man Chris Pitman, bassist Tommy Stinson (formerly of The Replacements)? as well as Paul Tobias, drummer Josh Freese and longtime GN'R keyboardist Dizzy Reed.

In 1999, the band released one new song, "Oh My God", on the soundtrack of the film End of Days. The track featured additional guitar work by Dave Navarro and Gary Sunshine, Rose's personal guitar teacher. The song's release was intended to be a prelude to their new album, now officially entitled Chinese Democracy. Geffen also released Live Era '87-'93, a collection of live performances from various concerts during the Appetite for Destruction and Use Your Illusion tours. Also in 1999, during an interview with Kurt Loder for MTV, Axl said that he had re-recorded Appetite for Destruction with the new band, replacing two songs with "Patience" and "You Could Be Mine".

The revised lineup finally made a public appearance in January 2001 with two well-received concerts, one in Las Vegas and one at the Rock in Rio Festival in Rio de Janeiro. The band played a mixture of old hits and new songs from their forthcoming album.

The new lineup played a further two shows in Las Vegas at the end of 2001. In 2002, rhythm guitarist Paul Tobias left the band because of his frustrations with life on the road. He was replaced by Richard Fortus (formerly of The Psychedelic Furs and Love Spit Love). The band then played several shows in August 2002, headlining festivals and concerts throughout Asia and Europe. They made their way to New York for a surprise appearance at the MTV Video Music Awards in September.

In 2002, the band's first North American tour since 1993 was organized to support Chinese Democracy. However, the opening show in Vancouver was canceled by the venue when Rose arrived late due to his plane being held up by bad weather conditions at Los Angeles airport. A riot ensued. This tour was met with mixed results. Some concerts did not sell well, while shows in larger markets such as New York sold out in minutes. Due to a second riot by fans in Philadelphia, tour promoter Clear Channel canceled the remainder of the tour.

The band went on hiatus until they were scheduled to play at Rock in Rio IV in May 2004. However, Buckethead left the band in March of that year, causing them to cancel. Also in March 2004, Geffen released Guns N' Roses' Greatest Hits, since Rose had failed to deliver a new studio album in more than 10 years. Rose expressed displeasure with this album as its track listing was established without his consent and went as far as trying to block its release by suing Geffen. This failed, however, and the album went triple platinum in the USA.

In February 2006, demos of the songs "Better", "Catcher In The Rye", "I.R.S." and "There Was A Time" were leaked through a fan site. The band's management requested that all links to the MP3 files and all lyrics to the songs be removed from forums and web sites. Despite this, radio stations began adding "I.R.S." to playlists, and the song reached #49 on the Radio & Records Active Rock National Airplay chart in the final week of February - the first time an internet leak had done so.

On May 5, 2006, Axl appeared on the Friday Night Rocks with Eddie Trunk radio show (during an interview with ex-Skid Row frontman Sebastian Bach) and said the new Guns N' Roses album would be released before the end of the year. Later in May, the band launched a European tour, headlining both the Download Festival and Rock In Rio - Lisbon. Four warm-up shows preceded the tour at Hammerstein Ballroom in New York City and became the band's first live concert dates since the aborted 2002 tour. The shows also marked the debut of virtuoso guitarist and composer Ron "Bumblefoot" Thal, replacing Buckethead. During the tour, Bach and Izzy Stradlin made frequent guest appearances. By the tour's end in 2007, the band had played to over 750 000 people in over 23 countries.

On April 5, 2008, a picture of Finck appeared on Nine Inch Nails web page under the title "Welcome Back!" starting the rumor of his possible reunion with Trent Reznor. On April 11, Finck expressed his happiness on playing again with NIN. On April 20, on Guns N' Roses' web site, Axl expressed surprise about the news.

Chinese Democracy had been given the tentative release date of March 6, then reported September 17, 2007. However, both dates passed with no sign of the album. After further release dates were discussed, the album finally came out on November 23, 2008.

Slash, McKagan and Sorum still play together in Velvet Revolver. However, Izzy Stradlin, original GN'R rhythm guitarist and co-composer of many of the band's most successful songs, has not joined them. He did however play a few dates as a guest with GN'R in the summer of 2006. Keyboard player Dizzy Reed, while not a founding member of the band (joining in 1990 in the Use Your Illusion period), remains in the current incarnation.