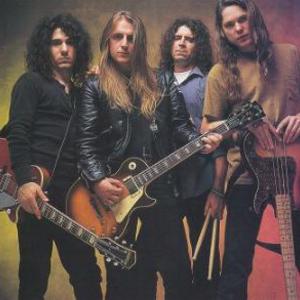 In the summer of 1989, three best friends, vocalist/guitarist Georg Dolivo, bassist Reeve Downes and guitarist Greg Fields met a drummer, Liam Jason, for the first time in a small rehearsal studio north of Los Angeles. They were soon to be one of the most popular bands to come out of the then exploding LA rock scene. Their no frills, ?put it on 11? style had quickly made them head banging favorites and within 2 years of that initial meeting, the boys were signing on the dotted line with Warner Brothers Records.

The self-titled debut album came out in the late summer of 1990, and the Bucket started touring full time.

The first album produced 2 singles, ?One Night Stand? and ?Blood on the Cross?, and before long, Rhino Bucket found themselves regulars on MTV's Headbanger's Ball and playlists of hard rock and college radio stations across the country. Eighteen months and thousands of touring miles later, ?One Night Stand? had become a top 40 single. It was time to head back into the studio for the making of album number two.

The second album, ?Get Used to It,? was recorded in Memphis with legendary rock producer Terry Manning (Led Zeppelin, ZZ Top, George Throrgood) and it hit the stores in 1992. A song from that release, ?Ride with Yourself?, found its way onto an unknown movie soundtrack, Wayne's World. In the middle of the subsequent touring, drummer Liam Jason unexplainably, left the band. The Bucket replaced Liam with former AC/DC and DIO skin-basher Simon Wright, who remained with the band through the recording and touring of the band's third album, ?Pain.? Although that album again found support in hard rock circles, that was to be the end of Rhino Bucket, phase one.

Jump ahead to Spring, 2000. One Friday night, over a beer or three (or was it four?), Georg and Reeve decided to try and look at reforming Rhino Bucket with Brian Forsythe (formerly of KIX) filling in the lead guitar slot.The ?new? Rhino Bucket soon found their audience had been patiently waiting for them as well. Their first gig back, at Ricki Rachtman's World Famous Cathouse, was a complete sell out. Two movie soundtracks followed, along with gigs up and down the golden state and once again, it was time to look for a label. This time, the band knew just what they wanted and after turning down offers from labels they didn't think were right for them, the band received a phone call from an old acquaintance of Brian. It was the CEO of cool indie rock label Acetate Records. The Bucket had found their new home. It took 4 years.

The band has released Rhino Bucket album number four, titled ?And then it got? ugly? . It is 100% Rhino Bucket. Straight ahead, 110 octane, burn the house down Rock n' Roll.

No Song Left Behind

And Then It Got Ugly

Get Used To It