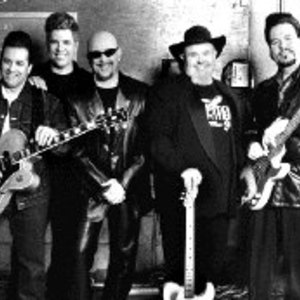 The Fabulous Thunderbirds are a blues-rock band, formed in 1974. Their original line up included guitarist Jimmie Vaughan, the older brother of the influential electrical blues guitarist Stevie Ray Vaughan. After performing for several years in the Austin, Texas blues scene, they earned a recording contract with Chrysalis Records and later signed to Arista. The first two albums released in 1979 and 1980 (with Keith Ferguson on bass and Mike Buck on drums), did not initially sell well, but are now regarded as successful white blues recordings.

Their blues style mixed Texas blues with the harmonica-laced swamp blues sounds of Slim Harpo and Lazy Lester ? both of whom the T-Birds covered. Their third album, Butt-Rockin', released in 1981, took the band closer to old rhythm and blues and added piano and brass section played by additional musicians.

The band broke into the mainstream in 1986 with Tuff Enuff. The single of the same name was featured in the Kirk Douglas and Burt Lancaster film Tough Guys, as was the follow-up single, "Wrap It Up". The band's music was also played in John Cusack's 1987 movie Hot Pursuit. The Fabulous Thunderbirds' next album, Hot Number, fell off the charts quickly and alienated many of the bands' long-time fans due to its slick pop-oriented sound. The band then began a long series of line-up changes and obscure, yet improved, albums throughout the 1990s. Drummer Mike Buck left the band in 1980 and guitarist Jimmie Vaughan left in 1990.

Alumni of the T-birds include: