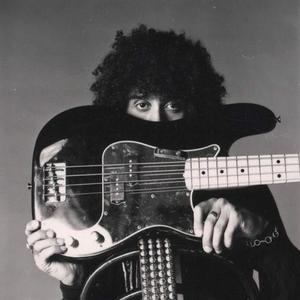 Philip Parris Lynott (20 August 1949 ? 4 January 1986) was an Irish singer, instrumentalist and songwriter, who first came to prominence as a member of Thin Lizzy. Lynott was born in Hallam Hospital (now Sandwell General Hospital) in West Bromwich (then in Staffordshire), England, the son of a Nigerian father, Cecil Parris, and a White Irish Catholic mother, Philomena (aka Phyllis) Lynott, whose surname he took.

Lynott was born in Hallam Hospital (now Sandwell General Hospital) in West Bromwich (then in Staffordshire), England, the son of a Nigerian father, Cecil Parris, and a White Irish Catholic mother, Philomena (aka Phyllis) Lynott, whose surname he took. His father left his mother just three weeks after he was born and returned to his native Brazil. He was brought up in Moss Side , Manchester before moving to Crumlin, Dublin, whilst he was still quite young, to live with his grandmother, Sarah. His parents reportedly kept in touch for a number of years after his birth, but Lynott did not meet his father until the late 1970s.

In the mid-1960s, Lynott began singing in his first band, the Black Eagles. It was around this time that he befriended Brian Downey. He formed Thin Lizzy around 1969 in Dublin after a short stint in Brush Shiels' Skid Row with Gary Moore. Lynott was the main songwriter for Thin Lizzy, as well as the lead singer and bassist. Lynott was half black, and was inspired by Jimi Hendrix as an example of how a black man could be successful fronting a hard rock band. Their first top ten hit was in 1973 with the traditional Irish song "Whiskey In The Jar".
In 1978, he was featured in Jeff Wayne's Musical Version of The War of the Worlds, singing and speaking the role of The Parson. In 1979, under the name of "The Greedies", he recorded a Christmas single, "A Merry Jingle", featuring other members of Thin Lizzy as well as Steve Jones and Paul Cook of the Sex Pistols.

Though Thin Lizzy were still enjoying considerable success, in 1980 Phil Lynott launched a solo career with the album Solo in Soho, which was a Top 30 UK album and yielded two hit singles that year, "Dear Miss Lonelyhearts" and "King's Call". The latter was a tribute to Elvis Presley, and featured Mark Knopfler on guitar. His second solo venture, The Phil Lynott Album was a chart flop, despite the presence of the single "Old Town". The song "Yellow Pearl" (1982), was a Top 20 hit and became the theme tune to Top Of The Pops.
Also in 1980 he married Caroline Crowther, with whom he already had a child, Sarah. She later gave birth to their second daughter, Cathleen. Caroline is the daughter of British comedian Leslie Crowther.

In 1983 Thin Lizzy disbanded, and later that year Lynott recorded a rock'n'roll medley single, "We Are The Boys (Who Make All The Noise)" with Roy Wood, Chas Hodges and John Coghlan, and collaborated with former bandmate blues,/ rock guitarist Gary Moore on "Out in the Fields" (a No. 5 UK hit in 1985, his highest-charting single ever) and "Parisienne Walkways" (a UK no. 8 hit). His last single, "Nineteen", released a few weeks before his death, was produced by Paul Hardcastle. It bore no relation to the producer's chart-topping single some months earlier.

Lynott's last years were dogged by drug and alcohol dependency, and the night of December 25, 1985, he was rushed to hospital. He died of heart failure and pneumonia on January 4, 1986 at the age of 36.

A life-size bronze statue of Phil Lynott was unveiled on Harry Street, off Grafton Street, Dublin in 2005. The ceremony was attended by former band members Gary Moore, Brian Robertson, Brian Downey and Scott Gorham, and by Lynott's mother. The attending Thin Lizzy members paid tribute with a live performance. His grave in St. Fintan's cemetery in Sutton is regularly visited by family, friends and fans.
In November 2005, American actor Gary Dourdan revealed in a radio interview that he has carried out preliminary work with a view to playing Phil Lynott in a film biography.

In 2006 Lynott's mother allowed Micky Waters, bass guitarist of The Answer to be the first to play her son's bass since his death. The bass was also used in the band's music video for the single Keep Belevin'

The Man And His Music Vol V

The Man And His Music Vol VI

The Man And His Music Vol II