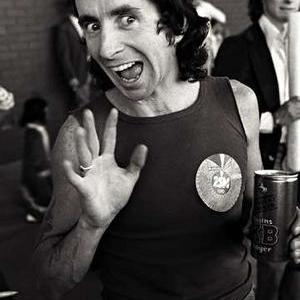 Ronald Belford ?Bon? Scott was born on 9th July, 1946, in Kirriemuir, Scotland. At the age of 6, Scott's family emigrated to Australia. He grew up in Perth, learned drums and bagpipes in the local Scots pipe band. He always had problems with rules, and this resulted with his dropping out of school at the young age of 15. Scott spent a short time in Fremantle Prison in the assessment centre, and nine months at the Riverbank Juvenile Institution relating to charges of giving a false name and address to the police...

In 1973, just after returning home from a tour of England, Fraternity went into a form of suspended animation. In this period, Scott started playing for a band named Peter Head's Mount Lofty Rangers. It was after leaving a rehearsal with them that Scott got into a motorcycle accident and suffered serious injuries. Fraternity reformed, replacing Scott with now-legendary singer Jimmy Barnes.

The following year, while doing odd jobs in the Adelaide music scene, Scott first met the members of AC/DC, while working as a chauffeur. The band was driven by the brothers Angus and Malcolm Young, younger siblings of Scott's friend George Young. Scott was impressed by the band's energy and drive, and the naive bandmates were, in turn, quite taken with the experienced frontman. When AC/DC fired their original singer, Scott replaced him.

In a 2002 interview on Australian radio station Triple J, Angus Young cited how Scott was much older than his band mates. Scott's advice to Angus (the youngest member of the band) was "Whatever I do, you don't!". Scott quickly turned AC/DC from a glam band to a stripped back, foot stompin', no-nonsense rock band.

At the helm of AC/DC, Bon was arguably the most charismatic front man Australia has ever seen. His tough-yet-cheeky persona on stage made him a macho icon that men revelled in and girls loved. His high-pitched vocals, mullet hairstyle, short stature, larrikin nature and loutish behaviour rolled up into an image that's been one of the most enduring in rock history. However, Scott was also notorious for being a heavy drinker and this would eventually lead to tragedy. After a night of heavy drinking in London's Camden Town, he passed out in a friend's car and was left to "sleep it off". He was found dead in the early hours of February 19th, 1980. He was 33 years old. The cause of death listed on his death certificate was "Acute alcoholic poisoning" and "Death by Misadventure"

Shortly after his death, British singer Brian Johnson replaced him, and AC/DC recorded Back in Black, which is to this day the second best-selling album of all time. The album cover was all black as a tribute to Bon Scott.

Scott was cremated and his ashes spread in Fremantle Cemetery. Sailors and other debaucherous folk are known to pay tribute to Scott by drinking at his grave.

The gravesite of Bon Scott, the legendary lead singer of veteran rockers AC/DC, has become one of Australia's most treasured cultural icons (2006). More than 26 years after Scott's death, the National Trust of Australia has decreed his grave in Fremantle cemetery important enough to be included on the list of classified heritage places.

Kirriemuir recently unveiled a plaque in memory of Bon. It is sited on the doorstep of the Tourist Information Centre in Cumberland Close.

Bon Scott with The Spektors and The Valentines

The Early Years (With The Valentines) (Vinyl)