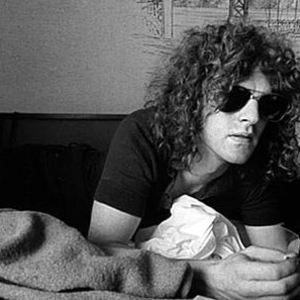 Ian Hunter (born Ian Hunter Patterson on June 3, 1939 in Oswestry, Shropshire, England) was the lead singer of the band Mott the Hoople from 1969 until the band broke up in 1974. He has since worked as a solo artist. Hunter began his musical career on the bass guitar. An early foray into music was as an entrant in a talent competition at one of Butlin's holiday camps, performing "Blue Moon" as part of a skiffle group with Colen York and Colin Broome.

Hunter began his musical career on the bass guitar. An early foray into music was as an entrant in a talent competition at one of Butlin's holiday camps, performing "Blue Moon" as part of a skiffle group with Colen York and Colin Broome.

Hunter memorialized how he left his family in a later song, "23a Swan Hill," the address of his teenage home in Shrewsbury above a police station where his father was the Station Sergeant. He notes in concert that "my Dad was real mean" and did not approve of his son's artistic direction, in contrast to his "grand dad", referenced in "Cleveland Rocks", as "he was a rocker and I am, too".

So Hunter took off for Butlin's and "never looked back". Bandmates York and Broome came from Northampton, and were in a band called The Apex, which Hunter soon joined to play rhythm guitar. In 1963, while living in Northampton, he formed his own band, Hurricane Henry and the Shriekers. With Tony Marriott and guitarist Julian Coulter, the Shriekers worked steadily in Northampton, and by 1965 had picked up Freddie 'Fingers' Lee as a pianist and frontman. In a 2004 DVD interview Hunter volunteers Lee and their gigs in Hamburg as a major turning point, when he first began to "actually think maybe I could do this instead of working in factories".

In 1966 Hunter moved to London, where he joined The Scenery with guitarist Miller Anderson, drummer Dave Dufort, and keyboard player Dante Smith. By 1967 Smith and Dufort had left the band while John Vernon Smith joined on drums. The Scenery recorded some material with Bill Farley at Regent Sound, which was released without the band's knowledge in France and Japan. In early 1968, The Scenery had run its course and Miller Anderson joined Dave Dufort in Paper Blitz Tissue.

Also in 1968 Hunter remained in the band to back up Freddie Lee in the At Last The 1958 Rock And Roll Show, along with drummer Pete Philips and guitarist Chris Mayfield. The group got a regular booking at The Angel in Edmonton, and drew interest from both Chrysalis and NEMS but the group was never signed by them. Mayfield was soon replaced by the ever traveling Miller Anderson, and the group released a single on CBS called "I Can't Drive." As the short-lived rock and roll revival began to wane, At Last the 1958 Rock and Roll Show changed its name to Charlie Woolfe and released a final single, "Dance, Dance, Dance".

Hunter played sporadically in various other bands throughout the 1960s, including The New Yardbirds, and backed Billy Fury, The Young Idea and David Mcwilliams. He also worked as a journalist and staff songwriter for the firm Francis, Day & Hunter (no relation). Other jobs he took during these years included road-digging for a local council, and reporting for a local newspaper.

By 1969 Hunter was married and had two children, but was still hoping for a return to making music full time. That year he auditioned for and joined yet another band, Silence. Silence soon renamed themselves after a novel by Willard Manus, published in 1966: Mott the Hoople. By this time Hunter had taken to wearing the sunglasses that have long since become his trademark (photos of him without his "shades" are rare). The band was a live smash in England although their early U.S. tours on the coasts were slow in building a following. Whilst a critical success and despite being renowned for being an excellent live act, Mott the Hoople did not achieve sustained commercial success. After a dreary 1972 concert in a "gas cylinder" in Switzerland, they announced their disbandment.

David Bowie, a longtime fan of the band, was upset and offered them a song he had just written. As Ian recalls in a 2004 DVD interview, "He offered us 'Suffragette City', which I didn't think was good enough. And then he sat down on the floor, Regent Street it was in a publisher's office and plays 'All The Young Dudes' on an acoustic guitar." It shot to No. 3 in the UK singles chart and Mott had new life.

Mott the Hoople then had considerable commercial success with the albums All The Young Dudes (1972, produced by Bowie); Mott (1973) and The Hoople(1974). The band began to score financially with songs such as "Roll Away The Stone," "Golden Age Of Rock &acute;n&acute; Roll," "Honaloochie Boogie," "All The Way From Memphis," "Saturday Gigs," and especially "All The Young Dudes." When in 1973 original lead guitarist Mick Ralphs left to form Bad Company, Hunter began to play guitar until a replacement could be found but at the same time he was increasingly pressured to write hits for the band. Luther Grosvenor took over as lead guitarist, Grosvenor, aka Ariel Bender, was briefly replaced by Mick Ronson after the release of a live album following The Hoople. However, Hunter left the band in December 1974. The remaining members carried on under the names Mott and British Lions. Hunter has written a memoir, Diary of a Rock'n'Roll Star, detailing a U.S. tour with Mott the Hoople.

In March 1975 Ian Hunter joined forces with Mick Ronson, formerly the leading member of David Bowie's backing band The Spiders from Mars and a member of Mott the Hoople for a brief time. Hunter's first single from his eponymous solo album was the UK Top 40 hit "Once Bitten Twice Shy". Hunter's best selling solo album was You're Never Alone With A Schizophrenic. It was released in 1979 with Ronson and several members from Bruce Springsteen's E Street Band. Two songs from You're Never Alone with a Schizophrenic became successes for other artists. "Cleveland Rocks" was covered by the Presidents Of The United States Of America, whose version was used as the theme song for The Drew Carey Show. Also, "Ships" became a No. 9 pop hit in the USA in late 1979 for Barry Manilow.

During his solo career Hunter frequently worked with Ronson until the latter's death in 1993, but he has also had musical connections with many other artists, including Queen, Mick Jones (The Clash), Clarence Clemons of Bruce Springsteen's E Street Band, Jaco Pastorius, Dennis Elliot (Foreigner), and David Bowie.

His album, Rant (2001), received wide critical acclaim and he won Classic Rock Magazine Songwriter's Award in October 2005.
In 2007 his latest album "Shrunken Heads" was released and it clearly shows that Ian Hunter is still very much alive.

When I'm President (With The Rant Band)

The Truth The Whole Truth And Nuthin But The Truth CD2

The Truth The Whole Truth And Nuthin But The Truth CD1