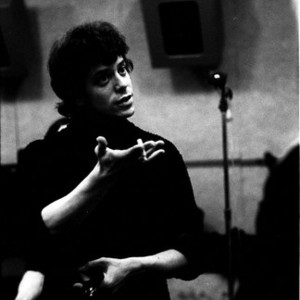 Lou Reed (born March 2, 1942) is an American rock artist originally from Brooklyn, New York, USA. Especially while a member of the The Velvet Underground in the 1960s, Reed broke new ground for the rock genre in several important dimensions, introducing more mature and intellectual themes to what was then considered a largely simplistic genre of music. In 1964 Reed moved to New York City and began working as an in-house songwriter for Pickwick Records.

In 1964 Reed moved to New York City and began working as an in-house songwriter for Pickwick Records. In 1964 he scored a minor hit with the single "The Ostrich", a parody of popular dance songs of the time, which included lines such as "put your head on the floor and have somebody step on it."

Reed first found prominence as the guitarist and principal singer-songwriter of The Velvet Underground. The band, which lasted from 1965 until 1973 (with Reed departing in late 1970 after the Loaded sessions), gained relatively little notice during its life but is often considered the seed from which most alternative and underground traditions of rock music sprang. As the Velvet's songwriter, Reed wrote about such taboo subjects as S&M (Venus in Furs), transvestites and transsexuals (Sister Ray, and Lady Godiva's Operation), prostitution (There She Goes Again), and drug addiction (I'm Waiting for the Man, White Light/White Heat, Heroin).

As a guitarist, he made innovative use of abrasive distortion, volume-driven feedback, and nonstandard tunings. Reed's flat, New York voice, stripped of superficial emotions and, like Bob Dylan's, flaunting its lack of conventional training, was no less important to the music's radical effect. One of rock's most volatile personalities, Reed made inconsistent albums that frustrated critics. The reputation he established more than forty years ago with The Velvet Underground has both haunted and elevated him to near-mythic stature.

Reed began a long and varied solo career in 1972. He scored a hit that year with Walk on the Wild Side off the Bowie-produced Transformer. For more than a decade he then seemed purposely to evade mainstream commercial success. Transformer was followed by the dark and challenging Berlin, an album that shed his fan base just as he'd cultivated it.

Albums such as the one-take low-ball wonder Sally Can't Dance and Metal Machine Music continued his nose-thumbing at mainstream success and his label. Metal Machine Music, upon which Reed later commented, "no one is supposed to be able to do a thing like that and survive.", although considered a contract-fulfilling joke upon its release, has been widely recognized as the invention of "noise music," and many artists, such as Japan's Merzbow have regarded it as a pioneering classic.

Despite his best efforts, the 70's were not without artistically and commercially successful albums. He had a major success with the live Rock 'n Roll AnimalLP, recorded following the release of Transformer, which received vast FM airplay in the mid-to late '70s due in no small part to the superb guitar solos of Steve Hunter. Coney Island Baby contained some of the best written and performed songs in Reed's oeuvre and Street Hassle saw Reed brave new-wave stylings.

Rock and Rule, an animated film centered around rock music in a post - apocalyptic future, featured music by Reed and other similar artists. His contribution vividly helped define the evil character Mok, and reflected his ongoing exploration of dark subjects. Although released within a couple of years of another animation cult classic, Heavy Metal, the 1983 release of R&R was a commercial failure. Despite the advanced animation, lack of marketing support by the parent company doomed it. The movie was relegated to late - night cable TV, where it built a small but persistent fan base.

Despite erratic turns, Reed's work won him wide recognition by the late 1980s as an essential elder statesman of rock. For decades he has written about intense subjects including heroin, transexuals, and S&M - not to mention the horror stories on Berlin - which had never been presented in rock and roll before. The industry had matured, to the extent that his commercial position as an "art rocker" was secure.

Reed has lived in New York City for most of his life and much of his music evokes the city, earning the singer comparisons (which he has encouraged) to William Faulkner and James Joyce as writers of regional interest. He also cites the poet Delmore Schwartz as a great influence. Reed studied creative writing under Schwartz at Syracuse University in the early 60s. The song My House tells the story of a Ouija board which spells out Delmore, and how this event inspired Reed.

In May 2000, Reed performed before Pope John Paul II at the Great Jubilee Concert in Rome. In 2000, a new collaboration with Robert Wilson called "Poe-Try" was staged at the Thalia Theater in Germany. As with the previous collaboration "Time Rocker," "Poe-Try" was also inspired by the works of a 19th century writer: Edgar Allan Poe. Reed became interested in Poe after producer and long-time friend Hal Willner suggested he read some of Poe's text at a Halloween benefit he was curating at St. Ann's Episcopal Church in Brooklyn.[24] For this new collaboration, Reed reworked and even rewrote some of Poe's text as well as included some new songs based on the theme explored in the texts. In 2001, Reed made a cameo appearance in the movie adaptation of Prozac Nation. On October 6, 2001, the New York Times published a Reed poem called Laurie Sadly Listening in which he reflects upon the 9/11 terrorist attacks.[25]

Incorrect reports of Reed's death were broadcast by numerous U.S. radio stations in 2001, caused by a hoax email (purporting to be from Reuters) which said he had died of a drug overdose. In 2003, he released a 2-CD set, The Raven, based on "Poe-Try." Besides Reed and his band, the album featured a wide range of actors and musicians including singers David Bowie, Laurie Anderson, Kate and Anna McGarrigle, The Blind Boys of Alabama and Antony Hegarty, saxophonist and long-time idol Ornette Coleman, and actors Elizabeth Ashley, Christopher Walken, Steve Buscemi, Willem Dafoe, Amanda Plummer, Fisher Stevens and Kate Valk. The album consisted of songs written by Reed and spoken-word performances of reworked and rewritten texts of Edgar Allan Poe by the actors, set to electronic music composed by Reed. At the same time a single disc CD version of the albums, focusing on the music, was also released.

Lou Reed teamed up with The Killers on the track Tranquilize for their new compilation album Sawdust, which was released on November 13, 2007.

In December 2006, Reed played a first series of show at St. Ann's Warehouse, Brooklyn, based on his 1973 Berlin song cycle. Reed was reunited on stage with guitarist Steve Hunter, who played on the original album as well as on Rock 'n' Roll Animal, as well as joined by singers Antony Hegarty and Sharon Jones, pianist Rupert Christie, a horn and string section and the Brooklyn Youth Chorus. The show was being produced by Bob Ezrin, who also produced the original album, and Hal Willner. The stage was designed by painter Julian Schnabel and a film about protagonist "Caroline" directed by his daughter, Lola Schnabel, was being projected to the stage. A live recording of these concerts was also published as a film (directed by Schnabel) which was released spring 2008. The show was also played at the Sydney Festival in January 2007 and throughout Europe during June and July 2007. The album version of the concert, entitled Berlin: Live At St. Ann's Warehouse, was released in 2008.

On October 1, 2008, Reed joined Richard Barone via projected video on a spoken/sung duet of Reed's "I'll Be Your Mirror," with cellist Jane Scarpantoni, in Barone's FRONTMAN: A Musical Reading at Carnegie Hall.

On October 2 and 3, 2008, he premiered his new group, which later was named Metal Machine Trio, at REDCAT (Walt Disney Concert Hall Complex, Los Angeles). The live recordings of the concerts were released under the title The Creation of the Universe. The Trio features Ulrich Krieger (saxophone) and Sarth Calhoun (electronics), and plays free improvised instrumental music inspired by Reed's 1975 album Metal Machine Music. The music ranges from ambient soundscapes to free rock to contemporary noise. The trio played further shows at New York's Gramercy Theater in April 2009, and appeared as part of Reed's band at the 2009 Lollapalooza, including a ten minute free trio improvisation. At Lollapalooza, held in Chicago's Grant Park, Reed played "Sweet Jane" and "White Light/White Heat" with Metallica at Madison Square Garden as part of the twenty-fifth anniversary celebration of the Rock and Roll Hall of Fame on October 30, 2009. Reed's recent activity in films include providing the voice of Maltazard, the villain in the forthcoming Luc Besson animated film, Arthur and the Vengeance of Maltazard, and playing the role of himself in Wim Wenders' movie Palermo Shooting (2008).

In 2009, Reed became an active member of the Jazz Foundation of America (JFA). He was a featured performer at the JFA's annual benefit "A Great Night in Harlem" in May 2009.

Reed has remained active doing benefits and composing music. He has contributed vocals on the third Gorillaz album, Plastic Beach, on the song "Some Kind Of Nature" and co-wrote and performed backup music for a Chen Style T'ai Chi instructional DVD. He has a co-production credit on Laurie Anderson's Homeland.

Lou Reed performed a cover of the Buddy Holly song "Peggy Sue" which is featured on the tribute album Rave On Buddy Holly.

In 2010, French/American underground electronic recording artist, Uffie used an instrumental sample of The Velvet Underground track "Rock & Roll" for her debut album's title track "Sex Dreams and Denim Jeans", written about her 2009 divorce to Andr? Saraiva. Before the release of the album there was a contract-conflict between Uffie and Lou Reed as to who would be credited as the writer of the title track. The only way Lou Reed would allow her to use the sample was by calling "Sex Dreams and Denim Jeans" an "adaptation" of "Rock & Roll" as well as receiving the sole credit as the songwriter for the track. This dispute once again delayed the album by about six months and Uffie notoriously labeled Lou Reed as "fucking difficult" and when asked if he had heard the song, she stated "yes he has, he had to clear it. And it was a very not nice experience dealing with him, I have to say. I don't know what this guy's problem is but on the credits I think it even says something like he wrote it. He gets everything."

Reed also began touring with the Metal Machine Trio, which was widely viewed as a return to his exploration of noise and sound. In 2011, heavy metal band Metallica recorded a full length collaboration with Lou Reed entitled Lulu, released November 1 in North America and October 31 everywhere else. After he initially refused Susan Boyle the right to perform "Perfect Day" on an American television special ("America's Got Talent"), he subsequently agreed to direct her video rendition.

In January, 2012, Reed and John Cale sued the Andy Warhol Foundation for the license to use the yellow banana image from Warhol's art for The Velvet Underground & Nico album.

Reed contributed vocals to the track "The Wanderlust" on Metric's 2012 album Synthetica.