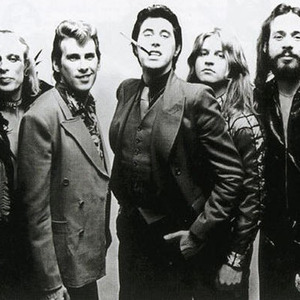 Roxy Music were a significant influence on the early English punk movement, as well as providing a model for many "New Wave" acts and the subsequent New Romantic and experimental electronic groups of the early 1980s. Ferry and co-founding member Brian Eno have also had broadly influential solo careers. Brian Eno has emerged as one of the most significant record producers of the late 20th century, with credits including landmark albums by David Bowie, Devo, Talking Heads, The Slits, and U2. Eno is widely credited for coining the term - ambient music - and has collaborated with, and/or produced such important artists as Daniel Lanois,Harold Budd, David Byrne, Robert Fripp (King Crimson ), Cluster, Jon Hassell, and Jah Wobble, among many others.

The group's name was partly an homage to the titles of old cinemas and dance halls, and partly a pun on the word 'rock'. Ferry had first named the band Roxy, but learning of an American band with the same name prompted the alteration of the name. The juxtaposition of nostalgia with contemporary or futuristic themes was a distinctive feature of the band, particularly in their earliest incarnation. The group is noted for their combination of idiosyncratic experimentation and sophisticated wit, evident in their literate lyrics, restrained instrumental virtuosity, and highly developed visual presentation, mainly directed by Ferry, that expropriated imagery from the realms of high fashion, kitsch, and commercial photography.

During the 1970s, Roxy Music emerged as one of the foremost bands of the time, popular throughout the UK and Europe. In the USA, Australasia and other regions, the band was esteemed by critics and enjoyed an ardent cult following, but they remained little-known among the general public until the 1980s, when they received attention for their cover of the John Lennon song "Jealous Guy," which became their biggest hit.

Later, with more sombre and carefully-sculpted soundscapes, the band's eighth and (until their 21st Century reunion) final album Avalon in 1982, was a major commercial success and restored the group's critical reputation (Rolling Stone: "Avalon takes a long time to kick in, but it finally does, and it's a good one.") Roxy Music toured extensively until 1983, when Bryan Ferry dissolved the band and band members devoted themselves full time to solo careers.

Roxy Music reunited for a concert tour in 2001 (minus Eno), and later returned to the stage for a live performance at the 2005 Isle of Wight Festival on Saturday 11 June 2005. On 2 July 2005, Roxy Music played "Jealous Guy", "Do the Strand" and "Love is the Drug" at the Berlin contribution to Live 8; only "Do the Strand" was available on the DVD.

Roxy Music have previously announced that they are recording a new album in 2005-2007 for a yet-to-be-confirmed release date.