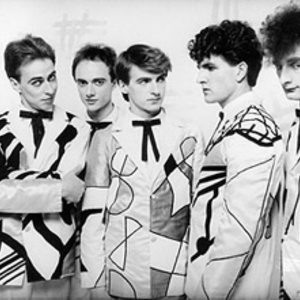 Split Enz is one of the most successful and longest running bands ever to emerge from New Zealand. The group was formed in Auckland, New Zealand in 1972 by Tim Finn, Phil Judd, Mike Chunn, Miles Golding, and Mike Howard, who originally called themselves "Split Ends." They soon changed the spelling to honor their NZ homeland. For much of their career, the band was known for wild costumes and make-up designed by Crombie.

For the first phase of their existence, the band played a kind of progressive rock infused with music-hall humor; later they slipped into a quirky new wave style that generated hits worldwide.

Numerous personnel changes have been a defining factor for the Enz. Notable additions include keyboardist Eddie Rayner and percussionist Noel Crombie in 1974, and in 1977 Tim's brother Neil Finn (who would later form Crowded House). The group effectively disbanded in 1984, but in subsequent years have reunited several times for well-received tours.

Last.FM also occasionally scrobbles a 60s garage band called The Split Ends (from Tampa, FL) under Split Enz if the listener omits the article "The" in their MP3 tags.